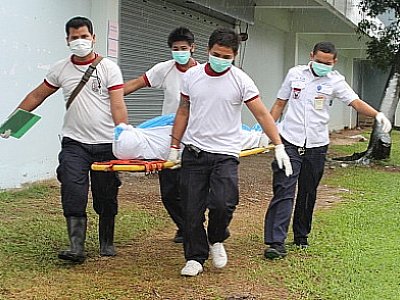 PHUKET: Phuket Police suspect that a homeless man found dead at Saphan Hin Park this morning died as a result of consuming too much alcohol in an attempt to keep warm during the current wet weather.

Phuket City Police Duty Officer Nanon Pitakkultorn received a 191 hotline report at 7:30am informing him of a deceased man laying next to Gymnasium 1 at Saphan Hin.

Lt Col Nanon arrived at the scene along with Kusoldharm Foundation rescue workers.

On arrival, they found the body of a man of about 50 years old. He was lying on his back, head resting against the gymnasium wall, with his few daily-use possessions nearby.

The initial investigation found no signs of violence, but police observed one to two centimeter wounds to both cheeks, which they attributed to animal bites after death.

“We haven’t been able to confirm his identity, but from statements collected from local residents he identified himself as Mr Phon. Nobody knows if that is his real name or what his family name is,” said Lt Col Nanon.

“We understand that Mr Phon was homeless and slept in the park. He earned a living collecting trash around the Saphan Hin area,” he added.

Lt Col Nanon believes that alcohol and the current weather might have had something to do with his death.

Mr Phon’s body was sent to Vachira Phuket Hospital for further examination and to await collection by relatives, if they can be found.