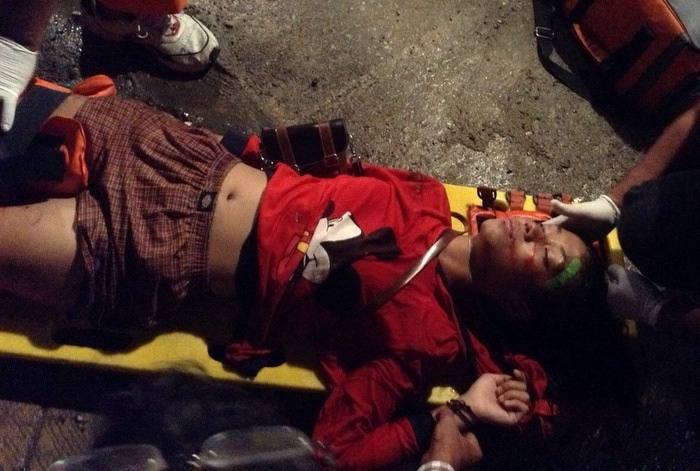 PHUKET: A Phuket hit-and-runner turned himself in to Chalong Police after leaving an unconscious teen motorbiker in his wake last night.

Pick-up truck driver Thepsak Jinotan, 42, left Bussakorn Sengsuvann,16, unconscious with a broken leg and other injuries after they crashed on Chao Fa East Road in Chalong at about 7:30pm yesterday.

“Shortly after the accident, Mr Thepsak turned himself in at the Chalong Police Station,” said Chalong Police Superintendent Noppadon Thiraprawat. “He told us that he drove away because he was shocked. He then parked at Ladthiwanaram temple [Wat Tai], before deciding to surrender to police.”

Police explained that Mr Thepsak was turning left, while Ms Bussakorn was going straight, leading to the crash.

“We have yet to press charges against Mr Thepsak, as he has surrendered to police and is waiting to negotiate with Ms Bussakorn’s family,” Col Noppadon said. “However, we do expect to press charges for reckless driving causing injury and for fleeing the scene of an accident.”

“Those who witnessed the accident were able to get pictures of Mr Thepsak’s license plate number and started sharing it through social media, such as Facebook and LINE,” explained Col Noppadon.

“Even though Mr Thepsak walked into the police station, I don’t think it would have taken us long to arrest him because all the essential details were already being posted online.

“I am very glad that people used these social networks in the right way, a way that is very helpful to police.”