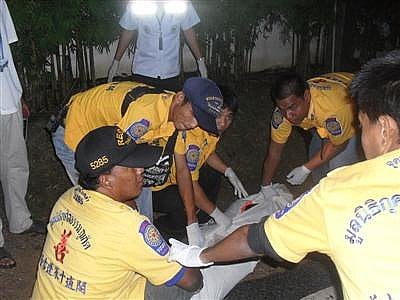 PHUKET: Phuket Police are searching for the driver of a pickup truck that hit and killed an unidentified motorbike driver in Cherng Talay last night.

At the scene, the road from Koktanode to Layan near the Laguna Phuket Outrigger resort and villa complex, they found the body of a man whose age was estimated at about 40 years.

Villagers said the man was hit by a metallic silver Toyota pickup that sped away after the collision.

No identification was found on the man, who was not wearing a helmet.

The apparent cause of death was a head injury.

The red Suzuki Crystal motorbike he was riding at the time did not have a license plate.

Local residents said the victim was employed as a security guard in the area.

They did not know his name or that of his employer, they said.

The victim was well-dressed, with a bright orange windbreaker, gray slacks and black shoes.

Kusoldharm Foundation workers transported the body to the Thalang Hospital morgue, where it will be stored until it can be claimed by relatives.

Anyone with information that could help identify the man or otherwise aid in the investigation should contact the Cherng Talay Police on 076-325630.