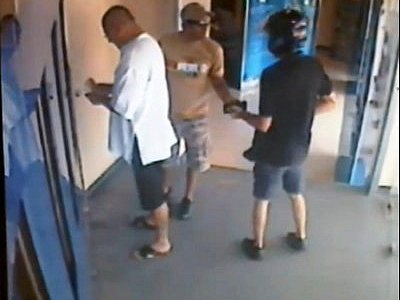 PHUKET: An English expat has gone public about 814,000 baht allegedly stolen from his bank account in an ATM scam.

Following the Phuket Gazette report of the arrest of a Romanian gang for ATM fraud in Patong on March 13, Paul Treherne felt it was time to let other people know about his own ordeal.

The four Romanians were arrested for stealing as much as 100 million baht through ATM card scams.

It is believed that fraudsters in the United Kingdom used “skimmers” to read data from genuine ATM cards.

The scammers then allegedly used the counterfeit cards to make fraudulent withdrawals from their victims’ accounts.

Mr Treherne claims that his Thai Military Bank (TMB) card was cleverly “skimmed” right behind his back as he used an ATM at the United Overseas Bank (UOB) on Rat-U-Thit 200 Pi Road in Patong on January 27.

In surveillance footage shown to the Gazette by Mr Treherne, he was seen using an ATM as a European-looking man wearing a baseball cap and sunglasses approached from behind.

After Mr Treherne received his cash, he walked away from the machine. The suspect then produced a 1,000-baht note and called to him.

“He said, ‘Hey, you’ve not gotten all of your money from the ATM. This just came out of it’,” Mr Treherne said.

“The guy sounded French. He explained that he had this problem before and told me that I needed to check my account to be sure everything was correct,” he said.

In the video, the suspect hovered around Mr Treherne, “helping” him with his “problem” as another man wearing a motorcycle helmet and carrying a shoulder bag approached an adjacent ATM.

In what appeared to be a very practiced maneuver, the “helper” managed to get possession of Mr Treherne’s ATM card and pass it to the man in the motorcycle helmet.

The second suspect then opened his bag and put the card inside, running it through a skimmer, Mr Treherne believes.

The card was then passed back to the helper who managed to get it back to Mr Treherne while he was still preoccupied with the ATM.

It wasn’t until February 5 that Mr Treherne realized his account had been plundered.

Through a series of withdrawals using a counterfeit card in Pattaya and Bangkok, the thieves managed to steal 814,000 baht from Mr Treherne’s account.

Mr Treherne and his wife filed a report with Patong Police on February 5.

They later filed charges with the Pattaya Police after learning that four Frenchmen were arrested there in February for a similar scam. “One of the guys arrested in Pattaya – the skinny fellow – I’m sure he’s the one in the motorcycle helmet that skimmed my card,” he said.

Mr Treherne was also shown photographs from one ATM in Bangkok depicting a man with Arab features allegedly withdrawing money from his account.

Capt Teerasak Boonsaeng of Patong Police said they believe the gang responsible for Mr Treherne’s case has yet to be arrested.

“Right now we are trying to compose a sketch of the suspect and issue an arrest warrant,” he said.

Mr Treherne praised Kathu Police for their handling of the case.

“They have their eyes open and have been very helpful – especially Capt Teerasak. These guys are diligent and on top of the case,” he said.

However, Mr Treherne is very dissatisfied with TMB in their response.

“They have not responded to any of my emails other than to issue an automatic response saying that my complaint was noted and that someone would contact me as soon as possible,” he said.

“They are not taking responsibility for this. They [the suspects] didn’t steal my money – they used a fake ATM card, not mine, to take money from TMB in a different city. They should give me back my money,” he said.

“If this is the way it’s going to be, I don’t feel my money is safe with them,” he added.

Anuchart Chatchayanukorn, manager at TMB’s Jungceylon branch, told the Gazette, “As I know now, the case is with the police. We have already forwarded the documents and other information to both the police and our client.”

Murder suspect arrested in Phuket after 17 years in hiding