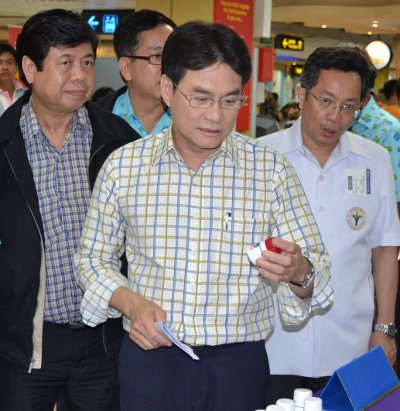 “In the past five days, 71 people – 69 Japanese, one American and one Thai – have each collected a 130mg bottle of Potassium Iodide from the booth,” said Minister Jurin.

The tablets, available at the booth on the second floor of the main terminal, will continue to be available free until the situation in Japan returns to normal, he added.

“We originally intended to provide the tablets for Thais traveling to Japan, but Japanese people returning home also asked for them,” Mr Jurin said.

“So we are providing the tablets for free to any people whose passports and boarding passes show they are heading into areas declared by the Japanese government as ‘risk areas’ for radiation.”

Mr Jurin also confirmed that the Ministry of Public Health was now testing food imported from Japan for radiation.

So far samples from 31 shipments had been tested, he said.

“Three of the shipments were agricultural products and 28 were seafood. We found no traces of radiation at all,” he said.