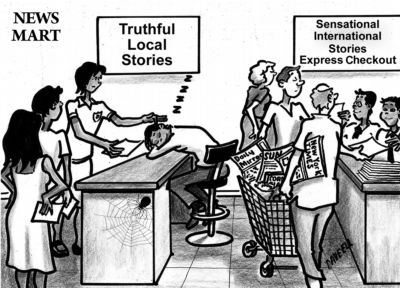 PHUKET: One of the many interesting aspects of being a journalist in Phuket is observing the way that stories we break here are picked up by foreign media outlets – and the spin that these outlets put on them.

Smaller countries often adopt an ‘us-against-them’ mentality when one of their own gets arrested in Thailand, rushing to defend the suspect and seizing the opportunity to criticize the Thai criminal justice system.

The latest case, of course, is that of the glamorous bar mat bandit, Annice Smoel, arrested for the theft of a bar mat in Patong. Photos and a summary of her agonizing sojourn in Phuket appear here.

Another example is the case of fugitive murder suspect Sam Van Treek. He was arrested in 2004 and charged with the murder of Phuket-based female dive instructor Chompoonut Jeab Kobram, who was stabbed 48 times in Mr Van Treek’s Pattaya apartment.

Van Treek was granted bail and fled to his native Belgium. From there he launched an assault on the Thai criminal justice system that became a veritable feast for the Belgian media, who appeared far more interested in the fugitive’s account of how he managed to flee than the extremely serious charges and strong evidence against him.

Almost five years later, he remains at large, despite the efforts of the Attorney General’s office in Bangkok to have him extradited back to Thailand.

The Gazette’s latest report on that case is available here.

Foreign media perceptions and treatment of cases like those of Mr Van Treek and Mrs Smoel stand in sharp contrast to the current tale of a German teenager who, for the past three months, has been held in detention at the Phuket Juvenile Observation and Protection Center.

The youth, arrested as a minor, is charged with conspiring to molest young schoolboys with alleged British pedophile Dax Young.

Mr Young allegedly preyed on schoolboys as young as nine years of age – as well as the German youth himself, who appeared in pornographic images that the police found when they searched Mr Young’s residence.

Though the crimes reportedly committed by the pair are of an extremely serious nature, there has been little international press coverage or debate over the German youth’s incarceration, or over the critical issue of whether or not he is, in fact, a perpetrator or just another of Mr Young’s victims. (Our latest coverage, here.)

In comparison, most of the stories in the international press about the Australian woman’s brief stint in a Phuket prison exuded, and often seemed to actively market, sympathy for the mother of four.

Few indeed questioned why, if the Phuket police are to be believed, she was so insulting and dismissive toward them. Almost none queried why she was able to deride and scoff so openly at Thai law, or why, as a tourist, she should have enjoyed immunity from that law.

So she has departed the stage as a bit of a celebrity, and Thailand’s image as a tourist destination has suffered yet another major blow.