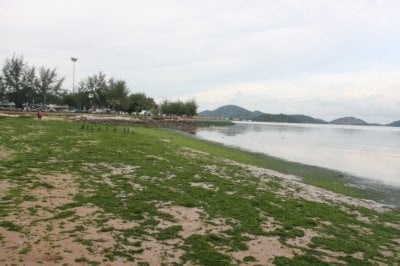 PHUKET CITY: The beach at one of Phuket’s most popular recreational areas has been inundated with bright green seaweed since the middle of May.

The affected area is at the tip of Saphan Hin park, which juts out into Phuket Bay.

Fisheries specialist Ukkrit Sataphumin of the Phuket Marine Biological Center at Cape Panwa said the seaweed was first reported to his office by people who use the park for their daily morning exercise.

Mr Ukkrit said the common Thai name of the seaweed is saaraay phakkaad thalay, which roughly translated means “sea vegetable seawood”. He said he did not know the English language name or exact scientific classification.

The seaweed grows quickly on the seabed under the right conditions of strong nutrient loading and lots of sunlight. It is then washed ashore by waves and currents, he explained.

Municipal officials have begun to remove some of the seaweed, but a great deal remains as they have yet to receive an order from park management to keep the beach free of the menace.

The algal bloom at Saphan Hin is the result of dirty water. The site is adjacent to the mouth of Klong Bangyai, Phuket’s largest watercourse, which has a catchment area covering almost all of Phuket City and parts of Kathu extending all the way to the Patong hillsides.

Phuket City operates a water treatment system in the area, but a large amount of untreated water with very low oxygen content is still released there – especially during the rainy season.

Park volunteer Piamsak Tunphalung told the Gazette the first signs of the seaweed began to appear in April, but that the volume has increased significantly this month.

The appearance of the seaweed is an annual event and they often hold special activities to collect it on Mother’s and Father’s Day, he explained.

Last year they collected all of the seaweed and disposed of it, but this year the park management has not sent an order to do so. Normally the seaweed is piled up and allowed to dry and naturally disintegrate, he said.

The offensive smell in the area is from dirty water and not the seaweed itself, he said.

Similar algal blooms take place every year on Patong Beach from December to February, when sunlight is strong, currents are weak and the seaweed’s main nutrient – untreated human waste rich in nitrogen and phosphorus – is discharged into the harbor in great amounts.

As for potential health risks, Mr Ukkrit said the seaweed is non-toxic, but noted that people who eat fish caught in polluted areas run the risk of ingesting toxins which can accumulate up the food chain into fish.