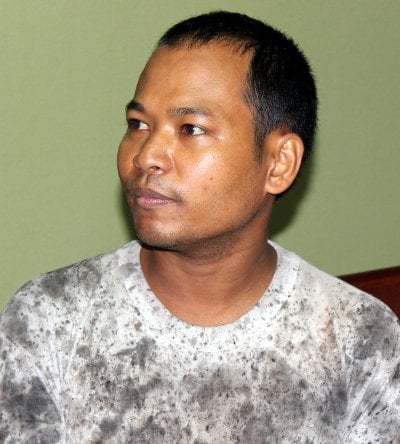 PHUKET: One of the two men wanted for making off with millions of baht in jewelry from a Phuket gold shop on Monday surrendered to police today, saying that he wanted to see his wife again before she died from a heart condition.

The man, a Burmese national named by police only as “Mr Koson”, arrived in front of Phuket City Police Station on a motorbike taxi at about 1pm.

To ensure his safety in being taken into custody, Mr Koson called the police emergency hotline 191 before his surrender to tell police that he was about to hand himself in.

Mr Koson, an ethnic Mon, told police in fluent Thai that he and his close friend “Mek” planned to rob the gold shop together.

“My wife was not involved in the robbery at all. She knew nothing about it,” he said.

Mr Koson had spent the previous day hiding in the forest near Kathu Waterfall.

“At midday yesterday, I walked out of the forest to ask Burmese workers for food. I was told that police were surrounding the area, so I went back into the forest and hid. I left the forest in the evening and went to stay at a hotel on Koh Sireh,” Mr Koson said.

“I saw the news that my wife had been arrested on the TV this morning. I wanted to see her at least one more time. My wife has a serious heart condition. Her heart valves are ‘leaking’. She may not live long,” he explained, holding up a bag of sweet bread rolls he bought to give her and their 13-year-old daughter, who also lives in Phuket.

Mr Koson told police that he robbed the gold shop because he wanted money to pay for an operation for his wife and to pay off debts of 400,000 baht that he racked up over snooker gambling, as well as other debts from people he had borrowed money from.

After the robbery, Mr Koson shared the spoils, which police estimates have valued at 2.9mn to 3.9mn baht, by giving a handful of gold to Mr Mek.

He kept one necklace for himself to use while he was on the run.

Moe Moe San Mooza was subsequently arrested at Mo Chit Bust Station in Bangkok on Wednesday. She was found in possession of 69 gold necklaces valued at 1.8 million baht hidden in shampoo bottles, of which Mrs Mooza denied any knowledge.

It was Mrs Mooza who alerted police as to where her husband was hiding in Phuket, and pleaded for him to hand himself in.

“Mek called me two days ago to tell me that he had left Phuket. He said that he was safe from police, as Chumphon Police had called him in for questioning and then let him go,” Mr Koson said today.

“We haven’t spoken since because my mobile phone battery went dead,” he added.

Police this afternoon were continuing their questioning of Mr Koson, and their search for Mr Mek.

Cabinet cuts it close with announcement of new Phuket Governor