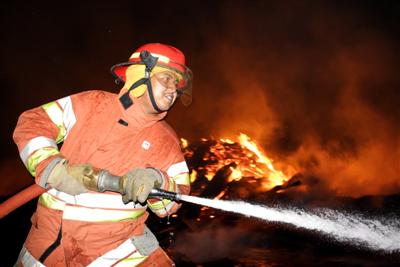 WICHIT, PHUKET: It took over fifty firefighters three hours to bring a blaze at a recycling center in Wichit under control last night.

The blaze started at about 7:40pm at the Naka Recycle warehouse, located just north of the turnoff to Wat Naka on Chao Fah West Road.

A total of 18 fire engines rushed to the scene: six from Wichit Municipality, six from Phuket City Municipality, three from Kathu, two from Rassada and one from the Phuket Provincial Administration Organization.

The last of the flames were finally extinguished just before 10pm.

A PGTV video of the fire can be seen here.

This morning, little but charred remains of paper, cardboard, clothes, plastics and other recyclable materials remained in the warehouse, which was formerly a lumber yard.

Police are now investigating the cause of the blaze.