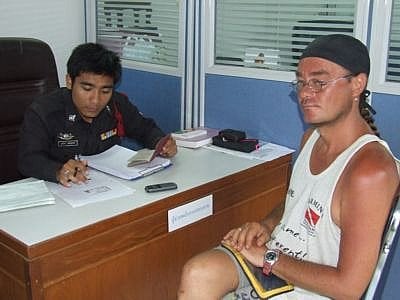 PHUKET: Following a tip-off from a cook, an expat dive instructor and equipment provider in Rawai believes a Thai employee may have stolen 30 diving tanks worth 180,000 baht.

He told police that earlier yesterday he had discovered the tanks missing from an equipment storage room located near the Ao Sa-ne Bungalow at Ao Sa-ne (‘Charming Bay’), near Nai Harn beach.

“A restaurant cook [next door to the storage room] says she saw Lek take the tanks last Thursday, one by one, on a motorbike.

“But she didn’t suspect anything as she thought I had asked him to do that,” Mr Rudloff told the Phuket Gazette at the police station.

After talking to the cook, the victim says he located Lek nearby and confronted him.

“When I asked him whether he stole my tanks, he denied it. He was speaking to me with shaking hands and voice. Then he got on my motorbike and drove away with it,” he said.

“The motorbike is a rental which I was planning to buy soon,” he explained.

“Lek has worked for me for two years, so I trusted him,” he added.

Mr Rudloff said his business, Freelance Associate Phuket Company, has been operating since 2000. He has lived in Phuket since 1999.

His company office is on Viset Road in Rawai.

He said he was renting out the diving tanks for 150 baht each per day.

There may be some hope for that as most of the tanks have identifying numbers on them, the victim noted.

Chalong police duty officer Tanan Petnarong told the Gazette that he would coordinate with Phuket City police to locate Mr Lek, whose ID Card address is in Phuket Town.