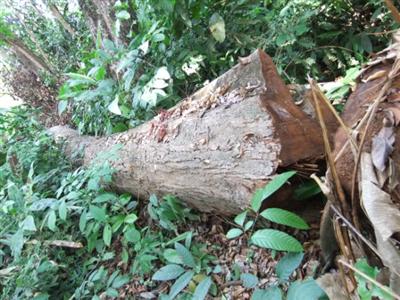 PHUKET TOWN: The Phuket deputy governor tasked with putting an end to encroachment on the island is calling for more arrests.

The following statistics compiled by the panel showed a disturbing increase in the number of reported encroachment cases on the island:

Fiscal 2007: 26 cases involving14 suspects, with more than 174 rai of state forest land and more than four rai of mangrove forest encroached upon.

Fiscal 2008: 44 cases involving 32 suspects, with more than 144 rai of state forest land and 80 rai of mangrove forest encroached upon.

Fiscal 2009: 62 cases involving 68 suspects, with over 213 rai of state forest land and 25 rai of mangrove forest encroached upon.

Fiscal 2010: Statistics for the first four months of Fiscal 2010, which began October 1, 2009, indicate this could be yet another record-breaking year.

There have already been 22 cases involving 28 suspects who encroached on 130 rai of state forest land and two rai of mangrove forest.

Noting that the number of cases continues to rise, Mr Teerayut told representatives from agencies represented on the panel that he wanted to see more encroachers arrested and charged.

All too often, officials turn up at encroachment sites only to find them empty.

Tools and heavy machinery are commonly seized as evidence, yet the perpetrators are seldom caught, he said.

In addition to arresting and charging encroachers, Mr Teerayut also encouraged officials to develop better methods to detect encroachment and prevent if from happening in the first place.

Doing this would require better delineation of who is responsible for which areas, as well as getting local people involved in reporting cases, he said.

The encroachment problem at the Bang Khanoon forest reserve in Tambon Thepkrasattri is now under control, but agencies continue to request land inside the park for projects.

These include requests by the Public Health Ministry to build a new hospital on 50 rai, as well as a request by the Thepkrasattri Tambon Administration Organization to site an Islamic cemetery on 30 rai.

The area is already home to the Mid-Road Dog shelter as well as a low-security prison run by the Department of Corrections.

Another area of concern for the panel was the Klong Mudong mangrove forest reserve in Tambon Wichit, where more than 100 households have been established on state land.

Klong Mudong mangrove forest in Tambon Wichit is another problem area. Of the forest’s 1,500 rai, about 900 rai have been encroached upon by some 100 families. Only 600 rai of mangroves remain there.