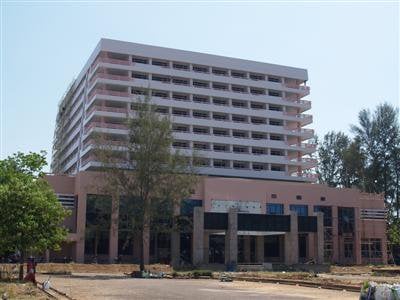 PHUKET TOWN: A hospital has become the latest piece of Phuket to get the pink paint treatment.

The Phuket Provincial Administration Organization Hospital, now under reconstruction on Anupas Phuket Karn Road in Phuket Town, will now join the Phuket Town buses and the new roadside pavilions which dot the island’s roads in being painted various shades of pink.

PPAO President Paiboon Upatising, whose campaign color was pink during the last election, said the PPAO hospital renovation is now about about 60% complete.

Limited medical services are scheduled to begin in August and a budget of 90 million baht per year is ready to pay medical staff for the facility, Mr Paiboon said.

For our story about how the PPAO acquired the long-abandoned medical facility, originally opened as the privately-run Phyathai Hospital, click here.