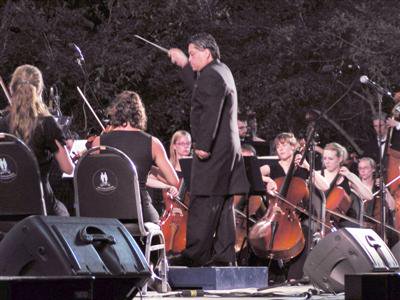 PHUKET CITY: Music lovers in Phuket were granted a rare treat over the past weekend: two performances by the world-class musicians of the Montana State University (MSU) Symphony Orchestra.

Under the direction of internationally renowned Japanese conductor Shuichi Komiyama, the 85-member orchestra kicked off with a rousing medley arrangement entitled Go West.

Certainly not to be confused with the Pet Shop Boys synthpop anthem of the same name, this was a majestic medley worthy of the state of Montana, taking themes from well-known Western movies including The Good, The Bad and The Ugly.

For many in attendance, including joggers out for their nightly run, it was their first ever chance to see a full orchestra play live – and most were enthralled.

Under a full moon, Dr Komiyama – a former conductor of the Thailand Philharmonic Orchestra – humbly thanked the Phuket Provincial Administration Organization (PPAO) for arranging the event.

The MSU orchestra, described by Dr Komiyama as “the best and the brightest the state of Montana has to offer,” is currently on a goodwill tour of the region with other stops in Singapore and Vietnam.

The second night’s performance was to a standing-room-only crowd at the mold-covered but acoustically perfect Music Hall on the grounds of Rajabhat Phuket University.

The concert program was similar both nights, allowing the audience to hear the full range a complete symphony orchestra has to offer.

This included: The Hebrides Overtures, Op 26 (Mendelssohn); a Porgy and Bess (Gershwin) medley with an impressive vocal performance by soprano Elizabeth Croy; Canadian Folk Song (Greg Young) featuring a clarinet solo by the composer and Slavonic Dance No. 3 (Antonin Dvorak).

Both nights ended in grand fashion with the MSU’s rendition of Mars from the orchestral suite Planets by British composer Gustav Holst.

The MSU orchestra, comprised of both students and staff of the school, also held a music workshop for local musicians during their visit to Phuket.