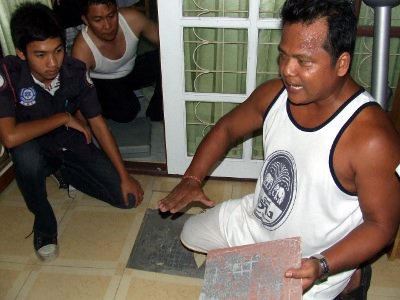 PHUKET: Though it did very little damage to anyone in Phuket, a 4.4-magnitude earthquake in the Andaman Sea about 80 kilometers from the resort province sparked fear in some neighborhoods.

Damaged tiles in a house south of Phuket Town prompted the residents of the area to leave their homes.

“My wife received an SMS on her mobile phone about an earthquake. Then, about an hour later while I was in the living room with our son, I heard a sound like a rat running and hitting the door and table,” said one resident in a street off Wirat Hongyok Road.

“I grabbed a wood stick and started looking for the rat, but I couldn’t find it. Then the tiles on the floor started cracking and popping up from the floor. This went on for about 20 minutes.

“I called for everyone – there were six people in my house – to leave the house immediately” he said.

Other residents left their homes to join his family on street, one household after a boy started panicking.

Worried about whether his house might collapse, another man called the Ruamjai Rescue Foundation.

Rescue workers arrived and after inspecting it said the damage was likely from poor construction.

“After all the disaster movies I’ve seen, I thought something was going happen suddenly. It was better for us to be prepared, even though it turned out to be nothing,” he said.

Asked for his name, the man declined, saying that people might “tease” him for being overly worried by the event.

US dad nabbed in Phuket gets 10 years for passport fraud