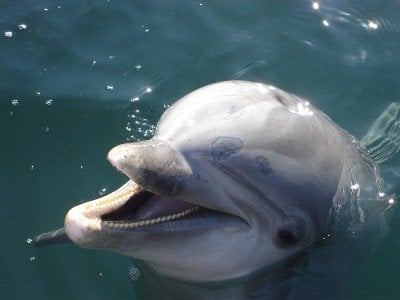 PHUKET: The recent announcement that a Canadian investor has sought provincial support for his plan to develop a 900-million-baht aquarium, resort and retail facility in Rawai has generated much debate over the ethics of keeping dolphins in captivity.

Soon after the announcement that dolphin performances were slated to be among the attractions at the aquarium, forum comments and letters arguing passionately against the practice arrived on the Gazette Online and at the Phuket Gazette offices in large numbers.

Holding dolphins in captivity unfairly sentences these intelligent creatures to a highly artificial and unhealthy existence, in surroundings enormously different from their natural environment, the authors said.

Shortly after the release of our news article on the proposed project, the investor, Daniel McDaniel, contacted the Gazette to explain that the project would include a science center and marine petting zoo, all part of a commitment to raise public awareness and increase education about marine life and the environment that sustains it.

While not arguing the accuracy of the description, he commented that the term “performing animals” as used in the Phuket Gazette article tended to convey a negative impression, as evidenced by the more than 50 negative comments in our online readers’ forum.

The Gazette empathizes with Mr McDaniel as a Phuket-supportive entrepreneur and as sincere man with no ill will toward dolphins.

And with the backing of Rawai Mayor Aroon Solos, it seems likely that his project will eventually be approved. After all, animal welfare issues don’t often factor into the decision-making process when elected local officials consider approval of projects with high potential for tourism here.

Several animal rights activists have told the Gazette that they are prepared to fight this issue, but history shows that Internet-based petitions and other forms of international outcry are not an effective way to change things on the ground in Thailand. Mobs, blockades and airport takeovers are the preferred modus operandi for that.

But mob activity here in Phuket, at least, has thus far been the domain of mobsters out to protect their personal, street-level interests. These do not include such abstruse concepts as animal welfare or anything else in the public interest.

In any event, the Gazette would like to encourage Mr McDaniel to view the film The Cove, which details the inhumane way in which baby dolphins are acquired. One can only hope that it might influence whatever final decisions he makes with regard to exactly what entertainment is to be provided if his project is given the go-ahead.

Many dolphins appear to us as ‘always happy’ because their facial structure tends to suggest a sort of permanent human smile. But almost all evidence suggests that they suffer terribly in captivity.

Given the established intelligence of dolphins, those among us who believe in karma should reflect on the consequences of subjecting these creatures to such a dismal fate – all for nothing more than our own amusement and financial gain.

Phuket Opinion: Has the Convention Center project become a farce?