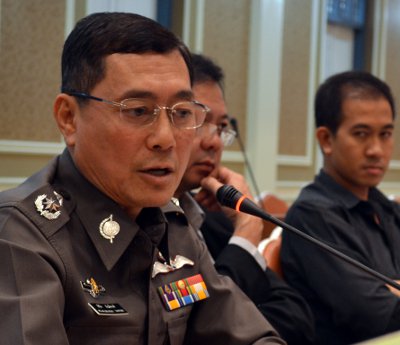 The meeting became the forum for the strongest comments yet by the Phuket-based honorary consuls, who urged Phuket Provincial Police Commander Pekad Tantipong to take action and bring to justice tuk-tuk and taxi drivers who assault foreign tourists.

“Days ago a German national [Kurt Trotnow] was beaten almost to death by tuk-tuk drivers in Patong. I don’t know how in ‘Tourist Thailand’ we can have the rule of law taken into the hands of the mob,” said German consul Dirk Naumann.

“If I had a dispute for 10,000, 100,000 or 1 million baht, I would go to the police and file a complaint, asking for help. But apparently the police in Phuket allow the tuk-tuk drivers to take the law into their own hands. The dispute was for 100 baht.”

Admitting that the German victim was drunk at the time and had a role in instigating the incident, he reiterated that the 200-baht minimum fare was the root cause of the tragedy – and many similar incidents that never get reported.

An 800-meter taxi ride (once in motion) in Bangkok cost just 14 baht, whereas the same distance journey in Patong costs 200 baht, he said.

Maj Gen Pekad said the event was a regrettable “crime of passion” that could happen anywhere when tempers get out of control.

He gave the recent shooting death of a Thai man by another Thai over a 1.82 baht dispute at a filling station as an example.

While not defending the prices charged, he said it wasn’t fully accurate to compare distance-based fares with local price structures.

Maj Gen Pekad expressed deep sorrow over the incident and promised to do everything possible within the law to bring the perpetrators to justice.

Two homosexuals found dead in as many days