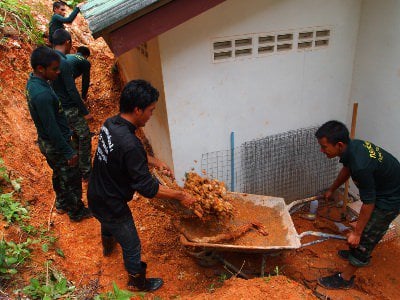 PHUKET: A sortie of 15 soldiers from the Royal Thai Army 2nd Infantry Battalion based in Ranong arrived in Phuket yesterday to help excavate by hand a house located high in the hills of Kamala, on Phuket’s west coast.

Heavy rains last Thursday caused earth on the slope above the house to slide down the hill, coming to rest along one wall of the modest home.

The weight of the dirt held back by the house had the residents worried that their home could slip downhill at any time, even in the middle of the night.

“We received an order to lend a hand a few days ago from officers of the 4th Army Area Command. The officers were in Phuket to inspect the problems caused by the flooding,” said troop commander Capt Jatupol Sriked.

Officials at the Department of Disaster Prevention and Mitigation Phuket office (DDPM-Phuket) called for help after realizing that they could not get heavy machinery up the slope to excavate the house, he explained.

The troop of soldiers, who form part of the 25th Infantry Regiment at the Rattana Rangsan barracks, were joined by local officials and at least 15 other volunteers to clear the landslide.

The excavation work was completed today.

DDPM-Phuket chief San Jantharawong said that his officers were looking into preventative measures for any future landslides at the site.