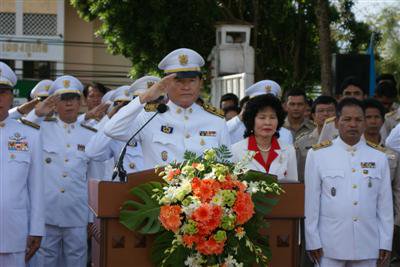 Led by Phuket Governor Wichai Phraisa-ngop, the crowd placed a wreath around a portrait of the great monarch at the auspicious time of 9:09am.

Many of those who took part were government officers.

October 23, a national holiday in Thailand, is the anniversary of the death of King Chulalongkorn (Rama V), one of Thailand’s most revered rulers.

The reign of Rama V, from 1868 to 9010, was characterized by extensive social and economic development, including the abolition of slavery and the corvée labor system.

Rama V is also famous for his ardent nationalism and skill in fending off colonization by European powers expanding their influence in Southeast Asia at the time.