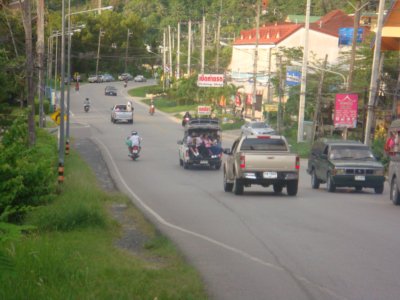 PHUKET: Two tourists robbed in Kata were left penniless when a thief snatched a bag containing all their remaining holiday cash from the basket on their rented motorbike last week.

The bag belonging to British holidaymaker 21-year-old Emma Kim Parker, a passenger on the bike driven by a male traveling companion, contained the equivalent of about 230,000 baht in US dollars and euro.

An expensive Nikon camera was also in the bag.

Police believe the lone basket bandit took advantage of the fact that the tourists would not be able to give chase with two of them weighing down their bike.

The pair had planned to stay in Thailand for several weeks, but with no spending money left after arriving less than a week before the theft, they told the Gazette they were so traumatized that they wanted to go home as soon as possible.

“This is our first time in Thailand and we don’t know what to do now. We’ve never had this kind of experience and didn’t expect our stuff could be stolen off a [moving] motorbike,” they said.

While waiting for money to be sent from abroad so they could buy flights home, the young travelers had to rely on charity from the owner of the Pineapple Guesthouse where they were staying.

“There is a safe deposit box in their room, but they didn’t keep their money in there. I don’t know why,” said the owner.

According to the police, the bandit had already targeted a young Swedish couple who were riding a motorcycle in the same area an hour earlier that evening, making off with a camera and 3,000 baht in cash.