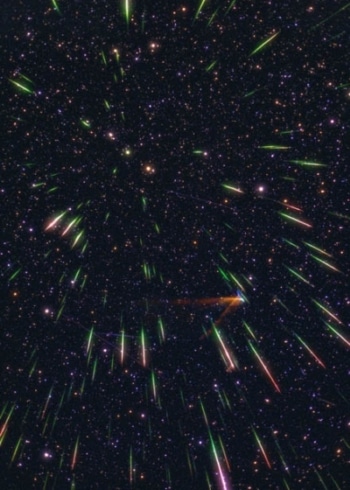 PHUKET: If the night sky over Phuket remains clear this week stargazers will be treated to the spectacle of hundreds of meteors streaking overhead, early Wednesday morning.

The annual celestial show known as The Leonids occurs as the Earth passes through the trail of an ancient comet.

Astronomers predict a shower of up to 500 meteors per hour, visible to the naked eye, as the Leonid cycle reaches a 33-year peak in intensity.

Rajabhat Phuket University Assistant Professor Sakchai Phetchuai said the meteor shower will be visible over the island just after midnight on Tuesday.

“The shower could last up to six hours but the peak time will be at around 2am Wednesday,” he said.

Beaches, mountains and other locations away from the light pollution of big cities will offer the best views.

Stargazers should spend at least 15 minutes in the darkness before the meteor shower begins, said Suparerk Karuhanont from the National Astronomical Research Institute of Thailand.

The meteors come from a trail of debris from the comet Tempel-Tuttle (55P/Tempel-Tuttle), named after independent discoveries of its existence by astronomers Ernst Tempel in 1865, and Horace Parnell Tuttle in 1866.

According to NASA, a Leonid meteor shower of such intensity may not be visible for another 100 years.