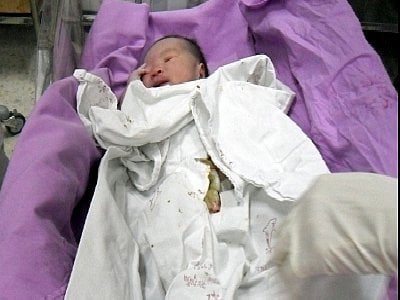 PHUKET: A Phuket baby boy, thought to be just hours old and with the umbilical cord still attached, has been found abandoned near a dump site in Kathu.

Phongthep Joyjard, a respected elder who lives in the area, discovered the newborn while he was out exercising on Soi Saithong near the dump site on Tuesday evening.

He heard the baby crying and followed the sound to find him wrapped in a towel inside a fertilizer sack, police said.

The unnamed infant, who had suffered no injuries other than some insect bites on his face, was taken to Vachira Phuket Hospital by officers of the Disaster Prevention and Mitigation section of Kathu Municipality.

Police are now trying to track down the child’s parents.

The newborn weighs just over six pounds (2.72kg) and initial tests show he is in good health, hospital staff said.

Mr Phongthep initially heard the baby’s cries at about 3pm, but it wasn’t until he was returning from his walk at about 4:30pm that he again heard the cries and raised the alarm.

A group of neighbors went to investigate and the baby was found at about 5pm.

They immediately reported the find to the police and soon after Kathu rescue officers rushed the baby to hospital.

From subsequent questioning of local residents, police say a teenage couple drove a motorcycle into Soi Saithong at about 2pm before departing 10 minutes later.

However, no witnesses have been able to confirm the couple’s appearance or provide a definitive description of the motorbike.

The baby is now under the responsibility of the Phuket Provincial Social Development and Human Security Office.

Phannee Sittikan, chief of the Human Security office in Phuket, told the Phuket Gazette, “The baby will be sent to the Baan Songkhla Shelter for Children as soon as his health allows. The baby will be of Thai nationality, in case we cannot find the parents.”

This latest Phuket baby abandonment comes after a garbage truck driver in Pa Khlok found the body of a dead newborn in the back of his truck while separating trash, in August.