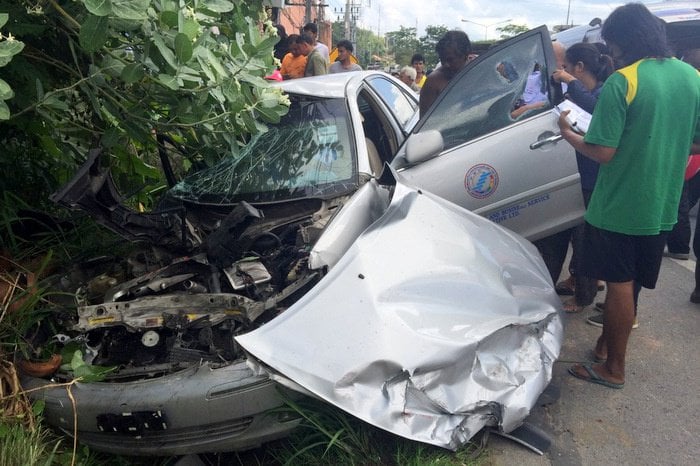 PHUKET: An airport taxi driver faces charges of reckless driving after his car slammed into an 18-wheeled truck near Mai Khao Temple, in northern Phuket, this morning.

The taxi rammed the trailer broadside, but luckily for taxi driver Vichan Artharn, 35, the car spun out from under the trailer and came to rest in roadside bushes next to a house.

“Mr Vichan suffered only minor injuries to his head and back,” confirmed Maj Santi Prakobpran of the Tah Chat Chai Police. “He was taken to Thalang Hospital for treatment as a precaution.”

Truck driver Sumet Kalasri, 39, was not injured in the impact.

“He said he was passing Mai Khao Temple when the taxi exited a side street at speed, and that he could not swerve to avoid the collision.”

Police have yet to question Mr Vichan about the accident.

“We are waiting for Mr Vichan to return from hospital, but at this stage it seems very likely that he will be charged with reckless driving causing property damage,” Maj Santi assured.

“Both parties have been asked to come to the police station to negotiate settlement for the damages.”