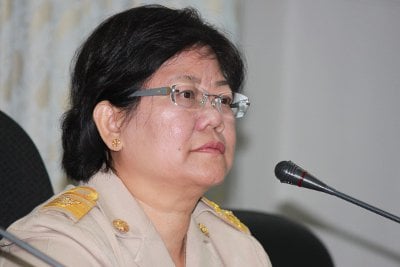 PHUKET: Phuket Vice Governor Sommai Prijasilpa will take on the responsibility of Acting Governor from October 1 following the Thai Cabinet failing to name a successor to Tri Augkardacha, who will retire this Sunday, September 30.

The news follows a Cabinet meeting on Tuesday not including the annual reshuffle of provincial governors on its agenda as Deputy Prime Minister Yongyuth Wichaidit did not attend the meeting, an officer at the Secretariat of the Cabinet told the Phuket Gazette.

A date has yet to be set for Cabinet to decide on a list of 19 provincial governor positions that will be available come October 1.

“Call us again on Tuesday,” the officer at the Secretariat of the Cabinet told the Gazette.

Governor Tri and 16 others will be retiring from their gubernatorial positions on September 30, while two positions will become available due to transfers.

As reported in The Nation, Mr Yongyuth vowed to chair the weekly Cabinet meeting as assigned by Prime Minister Yingluck Shinawatra, who is currently in the US.

However, the Mr Yongyuth skipped the meeting and assigned Deputy PM Chalerm Yoobamrung to chair the Cabinet session instead.

The meeting lasted only 45 minutes and did not consider the annual reshuffle of provincial governors as Mr Yongyuth had planned.

Manat Nurak, who is the Secretary to Phuket Provincial Governor, said the news will not affect provincial adminstration.

“I don’t think it will affect our work because the senior vice governor, Sommai Prijasilpa, will be acting governor until we receive official assignment from the Cabinet,” he said.

Governor Tri on Sunday will be bringing to a close 36 years of civil service. His first distinguished appointment was as Chief Administrative Officer (Palad) of Si Satchanalai district in Sukhothai province.

Originally from Nakhon Nayok, near Bangkok, Governor Tri was posted to Phuket in 2006 to serve as a vice governor, a position he held until 2010, when he was appointed Governor of Phuket.