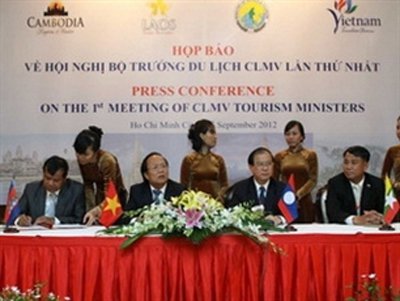 PHUKET: Thailand has to revise its strategy concerning a regional single visa scheme, or it could lose millions of tourists to neighboring countries, which are kicking off the “CLMV Single Visa” next year without the Kingdom’s participation.

Five countries – Thailand, Laos, Vietnam, Cambodia and Myanmar – agreed in 2005 to relax immigration procedures to attract more non-ASEAN visitors to the region under the framework of Ayeyawady-Chao Phraya-Mekong Economic Cooperation. They created the “Five Countries One Destination” campaign and ACMEC Single Visa to attract tourists from outside the region, especially from Europe, North America and Australia.

Tourists applying for a visa at any of the countries would automatically be allowed entry to the other four countries under the scheme, which is similar to Europe’s Schengen system.

In July, the CLMV Single Visa was launched by Cambodia, Laos, Myanmar and Vietnam.

These four nations plan to promote the new visa scheme to targeted markets at the World Travel Mart in London from November 5-8 and to alliances at the world’s largest tourism trade fair in Germany early next year.

Thanate Vorasaran, vice president of the Tourism Council of Thailand (TCT), said on Tuesday that Thailand was left out because of its stance on issuing visas.

The government, after years of negotiation, refused to join the agreement, saying it already permitted visitors from up to 45 nations to enter without a visa.

Thailand also signed a deal with Cambodia in 2007 for a single-visa scheme, but it is not yet activated. However, at all border checkpoints, Thai officials are ready to assist third-country tourists from Cambodia to pass through immigration.

Besides its unclear policy, Thailand was also suspected of fearing a loss of revenue from visa fees if it joined ACMEC, which requires tourists to pay the fee at the country of entry.

“In fact, all four countries need Thailand because they want tourists from Thailand,” Thanate said.

“Thailand alone received 20 million visitors in 2011, [compared with] more than the 12.3 million combined arrivals in the four countries. Thailand projects 26 million tourists in 2015 while CLMV nations aim at 25 million.”

China is now the largest source of Thai tourism revenue. Thailand could earn more than 1 billion baht per year in visa fees from the more than 2 million Chinese tourists expected to travel to the Kingdom.

About 2.2 million Chinese are expected to visit Thailand this year, up from 1.7 million last year. If neighboring countries waive visa fees for the Chinese, Thailand will suffer a huge loss. Tourists from third countries may shift to destinations in Indochina and Myanmar.

Vietnam was reported as having already waived entry permits for Chinese tourists, but the visa fee has been retained.

Sisdivachr Cheewarattanaporn, president of the Association of Thai Travel Agents (ATTA), has been urging the government for years to waive the visa fee for Chinese visitors.

“Private operators in Thailand now fear that inbound tourism will drop if non-ASEAN tourists enjoy greater convenience when entering other countries. Though we are in a strategic location, we will be unable to grasp the opportunity,” he said.

To build tourism competitiveness, the TCT and ATTA urged the Foreign Ministry to rejoin the CLMV Single Visa by fine-tuning the agreement or doing more bilateral deals with each country.

Kongkrit Hirantakit, a tourism adviser to Deputy Prime Minister Kittiratt Na-Ranong, said cross-border and intra-regional travel were parts of the main focus of the government to improve Thailand’s tourism industry. He has advised the Foreign and Tourism ministries to link Thai tourism with all ASEAN countries to regain the country’s competitiveness. Thai tourism’s edge has already dropped for five straight years despite the growth in arrivals.

Thailand’s share of the regional tourism market plunged from 38 per cent in 2008 to 33 per cent last year. Singapore and Malaysia became key rivals, as they have developed many new attractions and continue progressive plans.

About 80 million visitors travel into the region. Of them, 36 million or 45 per cent are from ASEAN countries and 44 million are from outside the region.

The average growth of tourism for the region is 6-7 per cent, a little higher than for the Asia-Pacific region.