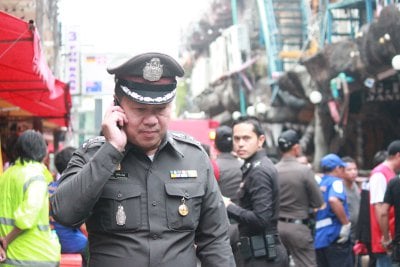 PHUKET: Police yesterday declined to commit to pressing any charges against the operators of the Tiger Discotheque over the fire that destroyed the venue and killed four people, including two tourists in Phuket’s main tourism town, Patong.

Provincial Police Commander Chonasit Wattanavrangkul chaired a meeting with Patong Police to review the forensics report into the cause of the fire and to “discuss” the results.

“The cause of the fire was from an electrical short under the ceiling at the front left of the building,” said Maj Gen Chonasit.

“The spark set alight the ceiling and the wall, both of which were coated with highly flammable expanded polystyrene (EPS) foam,” he added.

The foam used throughout the venue was previously identified by expert investigators as one of the main causes for the rapid spread of the fire throughout the nightclub, which had hundreds of revellers inside it when the fire broke out at about 4am on August 17.

Despite an official inquest by expert building inspectors citing the nightclub had breached numerous fire-safety regulations, thus contributing to the calamity, Patong Police Deputy Superintendent Kittipong Klaikaew told the Phuket Gazette, “We need to collect more evidence and question more witnesses. After we get the information [we need], we will hold a meeting to summarize all the details we have and make a conclusion as to the genuine cause of fire and decide what action we will take against the Tiger disco [operators].”

Phuket Vice Governor to take the big chair on October 1