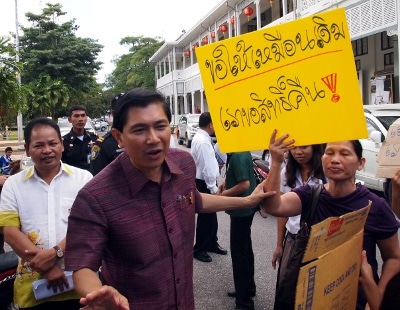 PHUKET: Food vendors to operate stalls near the Jui Tui Shrine in Phuket Town during the upcoming Vegetarian Festival have successfully overturned the shrine committee’s decision this year to hand over the right to collect stall site rents to homeowners in the downtown area.

“The vendors have been selling vegetarian food on Ranong Road in front of the shine [during the Vegetarian Festival] for years. Every year, we offer some money [to the shrine] to make merit; there were no problems,” said Pattama Thaipiya.

“This year, even if the shrine asks us to pay double the price, we are willing to pay,” she added.

Though happy to pay the shrine to make merit, Ms Pattama made it clear that there was no reason that the vendors should have to pay rent to the homeowners.

“We believe that the road is public property. We do not need to pay rent to the homeowners,” she said.

Ms Pattama and the other vendors also said that they were worried that the homeowners would raise the rent every year and that new vendors might offer more money to the homeowners to secure places along the road for the nine-day event.

The protest by the food vendors caught recently-arrived Phuket Governor Maitree Intusut off guard as they arrived at Provincial Hall, prompting the governor to instantly call a meeting to resolve the issue.

“Phuket City Municipality has never been involved in allocating space for food stalls [during the Vegetarian Festival]. We just gave the Jui Tui Shrine permission to rent out space along Ranong Road, as a way to encourage vendors to offer merit to the shrine,” said Phuket Town Municipality Deputy Mayor Kosol Tang-Uthai.

After two hours of discussion later that day, Phuket Vice Governor Somkiet Sangkaosuttirak made a decision on the matter.

“The vendors will pay rent to the Jui Tui Shrine in accordance with the law, as homeowners cannot collect rent from people on public land. The Phuket City Municipality will be in charge of making sure there is an understanding between the food vendors and the homeowners,” V/Gov Somkiet said.

“However, the vendors must leave open access to the houses so the owners can come and go as they please. The vendors must also make sure the area is kept safe and clean,” he added.