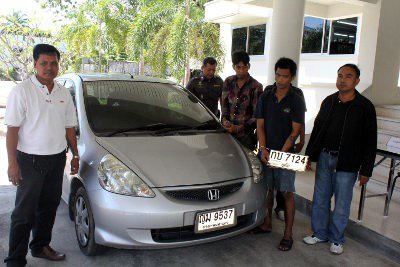 PHUKET: In one of his first public press conferences as Phuket’s top-ranking police officer, Maj Gen Choti Chavaviwat this morning announced the arrest of two men for stealing a car to go joyriding around the island.

Kamala Police arrested the two men yesterday in a parking lot near the Banzaan Market, behind the Jungceylon shopping complex in Patong.

Thalang resident Chutima Rojjanasuworaphong reported to Kamala Police on October 1 that her silver Honda Jazz, with Phuket license plates Kor Bor 7124, was stolen from a hotel parking lot in Kamala.

“Officers went to the scene and reviewed the hotel’s CCTV footage, which confirmed the car was driven out of the parking lot at around 3:30am. The officers then launched a search for the suspects,” Maj Gen Choti explained.

Yesterday, investigators received a tip-off, revealing the location of the missing vehicle. Kamala Police officers went to the scene and found the car with the two men sitting inside.

“Through the description of a dent and a scratch on the car, we were able to identify the vehicle easily,” said Gen Choti.

The officers then noticed that the front of the car was bearing a Bangkok license plate, Yor Mor 9537, but at the back was fitted with a Chiang Rai license plate, Kor Tor 377. Also, the registration tax sticker on the windshield was issued for the original Phuket 7124 license plates.

A search of the car recovered the original Phuket 7124 license plates,as reported stolen by Ms Chutima.

“So they brought the two men in for questioning and they confessed to stealing the car,” Gen Choti explained.

“Mac told police that he worked at a bar in Patong. He used to go out with a foreigner to the hotel in Kamala, so he was familiar with the place. On October 1, he returned to the hotel with Nad and broke into a guestroom.

“They stole some money and the key to the car. They went down to the parking lot, unlocked the car and drove off. They switched the license plates and continued to drive around Phuket in the stolen car,” Gen Choti explained.

Mac and Nad have been charged with collaboration to commit theft at night, he added.