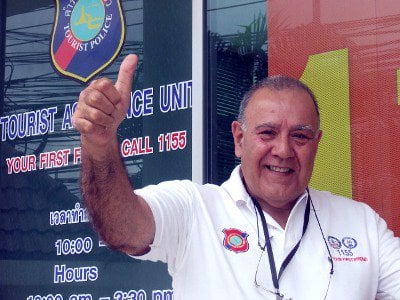 PHUKET: Phuket’s newest Tourist Police Volunteer Center opened at Chalong Circle this week and is already helping foreigners in need in the south of the island.

Within hours of opening their doors on Monday, officers at the center were called on to assist a Russian couple whose rented motorbike was involved in a minor accident at the roundabout.

The motorbike bumped into a pickup truck driven by Phuket expat Ossi Paldanius from Finland.

The new center is located on the north side at the corner of Sunrise Road, which leads to Chalong Pier.

“We are open from 10am to 3:30pm six days a week, closed on Sundays, but we are flexible on the hours if the need arises,” said Tourist Police Assistant Garry Halpin.

Seven volunteers living in Chalong are on the staffing roster, but about 40 have signed up to assist.

The on-call volunteers bring with them a huge variety of language skills, hailing from countries including France, Israel, Norway, Belgium, Jordan, Russia, the UK and the US.

The volunteers also include a contingent of local Thais.

“Chalong was chosen for our new office because it seems many things happen to tourists in Chalong, so it’s easy for us to help them and coordinate with police. We’re also very close to Chalong Police Station,” he explained.

“Also, it’s easy for tourists. They can come in the office in case they need help. Besides, we always help police as translators between them and tourists,” he added.

To help offset the costs of renting the office, the second and third floors of the building are available for rent, he added.