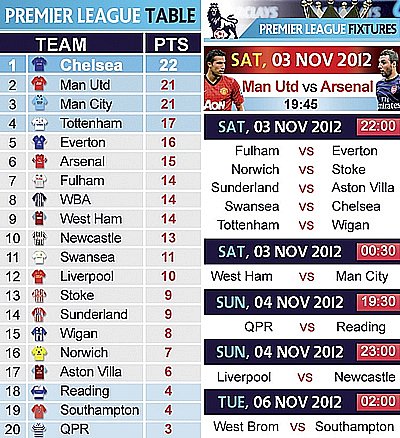 The official caused controversy during the game before these allegations came to light by sending off Branislav Ivanovic and Fernando Torres in Chelsea’s 3-2 defeat. To compound Chelsea’s misery, Manchester United’s Hernandez scored a 75th minute winner from an offside position. Clattenburg will not be officiating this weekend.

The Merseyside derby was all about Luis Suarez. David Moyes stoked the flames before the game, claiming the Uruguayan has a tendency to go down too easily when challenged. Suarez played a part in Leighton Baine’s own goal to give Liverpool an early lead, which he celebrated by doing a swallow dive in front of the Everton bench and David Moyes. The game finished 2-2 with Suarez denied a perfectly good injury time goal.

United striker Wayne Rooney has just been selected as the only British player on the Balloon d’Or shortlist for FIFA’s player of 2012. Japanese play maker Shinji Kagawa has been ruled out for four weeks but on the plus side, Ferguson has admitted that with Hernandez’s scintillating form he now has a striker dilemma.

Arsenal welcomed Jack Wilshere back to the team in last weekend’s win at QPR and England’s young star-in-the-making will be raring to go against Manchester United.