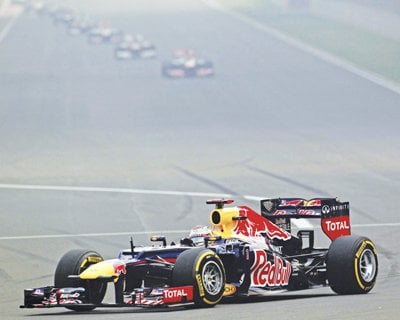 PHUKET: The 2012 season was McLaren’s to lose, and they lost it. In a smoggy and boring Indian GP, Red Bull reaffirmed its control.

As in Korea, Sebastian Vettel dominated for the second successive year. Mark Webber had a KERS problem, so Fernando Alonso managed second place for Ferrari.

McLaren chose the wrong tyre strategy and underperformed until they switched to hards. At least McLaren did better than in Korea.

Vettel is now well ahead in the Drivers’ Championship, with no-one looking like challenging him. Lewis Hamilton, who once looked like winning the season, is now battling Webber for fourth spot. Both of them are fighting Kimi Räikkönen for third spot.

Vettel is now 13 points ahead of Alonso, but even if Alonso scores no points this weekend, Vettel cannot seal the Championship until Texas at the earliest.

Alonso is seen by the media, fans, and peers as the best driver in F1. Ferrari’s battle is not with an ordinary Vettel, but with the design genius of Adrian Newey.

In the 1980s and 1990s, Williams was a top team, and Newey was its designer. In 1992 Williams took the Drivers’ Championship and Newey won his first Constructors’ title from previously dominant McLaren. 1993 delivered another with Alain Prost. In 1994 the death of Ayrton Senna, who joined Williams, blighted the season, but Newey took his third consecutive Constructors’ Championship.

Newey joined Red Bull in 2006. They won the 2010 Drivers’ Championship, and Newey became the only designer to win Constructors’ Championships with three F1 teams. He won again in 2011, and looks set for 2012.

In the Constructors Championship Red Bull is now 99 points ahead of McLaren, which is only 10 points behind Ferrari. So they are now fighting for second place in this championship. McLaren should make it.

Abu Dhabi is a modern track, with long straights and high and low speed corners, but fewer high-speed corners than Korea or India.

Low-speed performance is very relevant; braking stability and good traction are crucial. As in India there are two DRS sections and two detection zones.

It is the only F1 GP that starts in daylight and races into the dark. In Practice one today and three on Saturday, conditions are very hot. But practice two this evening will emulate race conditions.

Pirelli is supplying soft and medium compounds, which is disappointing. Tyre wear is not such a big issue in Yas Marina, and it would have been nice to see supersofts in action.

In 2011, Hamilton’s bling glinted atop the podium; unlikely this year, unless Vettel retires as he did last year having taken pole. Vettel won in 2009 and 2010, and looks set to do so again. Alonso, Button and Webber followed Hamilton last year, and Räikkönen was not there, so expect a similar mix to India.

The race will be shown on the big screen at the Green Man. The race is 8pm on Sunday, with qualifying at 8pm on Saturday. Click here for more information.

Phuket Sports: Premier League round up and look ahead