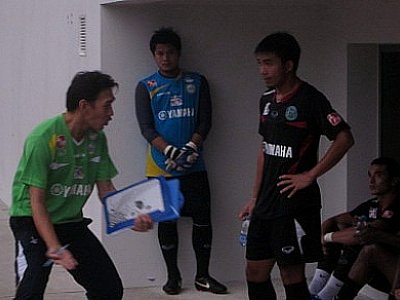 PHUKET: Despite overwhelming odds, Phuket FC’s Coach is confident that his side can share the points in tonight’s away match against Thai Division 1 top-side Bangkok United.

Speaking on the phone from the Thai capital this morning, Coach Anuruck “June” Srikerd told the Phuket Gazette that his side’s defensive game is tight and wouldn’t concede goals very easily.

“Even though we’re the underdogs, playing against a great team on their turf, I believe we have a good chance to get a point tonight,” he said.

The match, to be played at the Thai Japanese Stadium in Bangkok’s central Din Daeng district, is both sides’ 32nd match of the 34-fixture season.

With the season rapidly winding to a close, the outcome will have major implications for both sides.

In second place of the 18-team league, Bangkok (67 points) have openly vowed to prevail in all of their remaining matches – not only to be one of three teams to secure promotion to the elite Thai Premier League, but also to stay in contention for the Division 1 championship title, a contest currently being led by Ratchaburi Mitrphol FC (72 points).

Meanwhile, Phuket in 13th place, one spot ahead of this year’s five-team relegation pot, are at high risk of falling back down into the dreaded Division 2-regional league-bound zone.

Despite tonight’s fixture being both sides’ third match of the week, considering the high stakes, energy levels are expected to be high.

While Phuket’s starting 11 has yet to be confirmed, the list will not include high-profile Brazilian keeper Alonso Goleiro, who was kicked out of the team’s training camp on Thursday for allegedly violating team rules.

Coach June told Siam Sports reporters that Alonso had invited a girl into the camp’s accommodations.

“When I joined Phuket [at the end of last month], I had talked to and agreed with every player that they would have to strictly follow the rules so that we can meet the daunting goal of surviving the threat of relegation.

“However, Alonso broke a big rule and thus cannot train or play with us [for at least the Bangkok Utd match]. As for his [ultimate] punishment, it’s up to the team,” he was quoted in the report.

Alonso, however, denies any wrongdoing, telling the Gazette this morning that the girl in question was not his personal guest.

“She was the girlfriend of a good [male] friend who is also Thailand’s national goalkeeper coach… Actually, this is an internal problem… The coach has it out for me and other foreign players,” he said.

Kickoff is set for 6pm with fans in Bangkok encouraged to join the Phuket FC’s traveling cheer squad.

For those who can’t make it, the match will be broadcast live on national cable, True Channel 74. Nok Sanarm cafe, a favorite with many hardcore Phuket FC fans, across from Surakul Stadium, will also be airing the match.