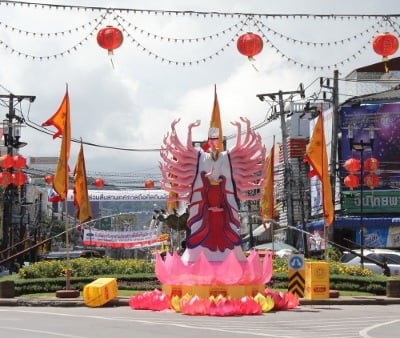 PHUKET: Ahead of tens of thousands of tourists arriving for the Phuket Vegetarian Festival, which begins tomorrow, shrine committees and local municipal workers have taken to the streets to post flags along major roads across the island and install huge decorations as part of the festivities.

All main roads through Phuket Town, and especially those leading from local Chinese shrines to the Chinese Shrine at Saphan Hin, have been decorated with the traditional yellow flags and Chinese lanterns marking the street procession routes.

At several key locations, huge decorations have been installed. At Suriyadet Circle, near the Downtown Market on Ranong Road, a large image of the Chinese goddess Kuan Im now stands resplendent in pink in her 1,000-hand pose.

All shrines taking part in the annual festival will at sunset tomorrow raise huge go teng poles skywards so that the Jade Emperor and the Nine Emperor Gods may descend from the heavens.

At midnight, the poles will be lowered and the festival will be declared as officially underway.

The street processions will begin on Tuesday with devotees from the Choor Su Gong Naka Shrine taking to the streets first.

The festival will draw to a close with the annual bonfire ritual at Saphan Hin, marking the return of the gods to the heavens, at midnight on October 23.