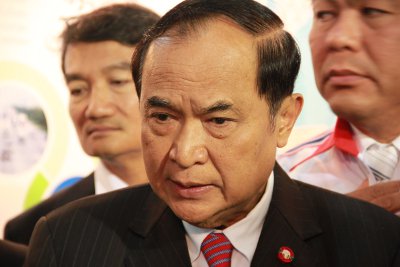 Mr Jarupong identified the Heroines’ Monument in Thalang and Chalong Circle in the south of Phuket as two areas that specifically need attention.

“Projects that improve public transportation in tourism destinations in the South [of Thailand] are quite important, especially in Phuket with projects such as the airport expansion,” Mr Jarupong said.

“These are all to reduce traffic jams,” Mr Jarupong said.

However, Mr Jarupong also told the Gazette that, “Today, we saw that we have more problems to consider, especially the traffic jams around the Heroines’ Monument and the narrow and busy streets around Chalong Circle.”

Mr Jarupong was in Phuket to attend a public meeting on the impact of the Patong Tunnel project on local residents, especially the Baan Mon community in Patong, where many of the local residents face forced relocation due to the impending road works to make way for the tunnel exit into the west coast town.

At the meeting, attended by about 500 participants, Mr Jarupong faced many questions over the 6bn-baht tunnel project.

Also at the meeting, Chartchai Tipsunave, Director-General of the Department of Rural Roads, delivered progress updates on other major road projects in Phuket.

Upgrades to Phang Muang Sai Kor Road, which runs behind Jungceylon in Patong, are now about 10 per cent complete, he said.

The improvements consist of widening the road to four lanes and installing footpaths, roadside drains and street lighting. “The project is expected to be finished by the end of next year,” he added.

Mr Chartchai said that the Klong Koh Pee project, a 200mn-baht dual-lane flyover across a mangrove forest in Phuket Town, probably will start in November. “It will take two years to finish,” he said.

Questioned about the disparity between the volume of money generated by Phuket and the money spent by the government on developing the tourism island, Mr Jarupong said that his ministry was spending 1.9 trillion baht on improving transportation links across the country.

“According to our information, less than 50 per cent of ‘local people’ are aware of our different projects nationwide, so we need to get out and tell the public, especially heads of local government and organizations, to publicize government projects. It would also give us some encouragement to know whether or not they agreed with our plans,” Mr Jarupong said.

The Transport Minister explained that two-thirds of the mega-budget is being spent on rail networks. “It’s more efficient and cheaper in light of gasoline prices continually rising,” he said.

Most of the land transportation budget is to be spent on, among other national rail projects, developing high-speed train and electric train networks serving Bangkok.

Mr Jarupong, however, did not reveal any details about the current status of the Phang Nga rail link that received Cabinet approval in March to undergo a feasibility study.

The link aims to build a railway from Surat Thani to an area in Phang Nga just north of the bridges joining Phuket to the mainland.

Sek Loso to play in Phuket