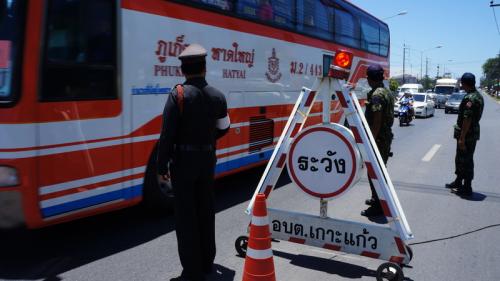 PHUKET: The first 24 hours of Phuket Seven Days of Danger road-safety campaign for the Songkran holidays passed with zero deaths.

In the 24 hours that followed there were four accidents, including two involving drinking and driving, according to statistics released today by the Department of Disaster Prevention and Mitigation Phuket branch (DDPM-Phuket).

All of the accidents involved motorcyclists; three of the drivers were women.

The first accident occurred at 1am yesterday when Kunlayanee Pulad, 22 cut in front of another motorcyclist on Chao Fa East Road.

This was followed by the first drunk driving case, which occurred at 1:44am when Wanassanan Maliwan, 17, collided with a power pole.

At 1:30pm, Tanyaluk Saipat, 28, failed to obey a traffic sign and collided with a taxi on Thepkrasattri Raod.

The second drunk driving case occurred at 6pm when Supalak Kwampian, riding without a helmet, collided with another motorbike on Thepkrasattri Road.

Ms Wanassanan suffered two broken legs and had surgery yesterday. The Gazette was not able to confirm the injuries of the other riders.

– Riding a motorbike without wearing a helmet – 125 people

– Driver and/or passengers failing to use seat belts – 30

– Driving under the influence of alcohol – 0