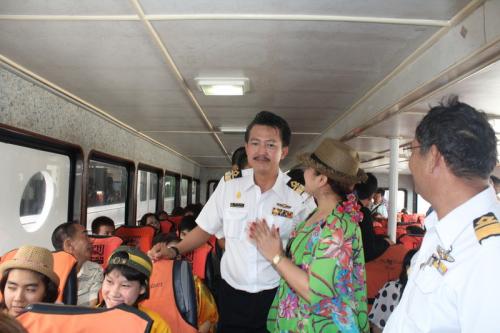 PHUKET: The Phuket Marine Office and Marine Police joined forces yesterday to launch a water-safety campaign aimed at ensuring the well-being of beachgoers and boaters during the Songkran holidays.

“Our mission is to be on hand to help people and decrease the risk of marine accidents during the Seven Days of Danger,” said Phuket Marine Police Inspector Chatchai Sakdee, who was on hand at Rassada Pier to start the campaign.

“There are about 4,000 tour boats in Phuket and we will be randomly checking them to make sure they are seaworthy and following regulations,” said Phuriphat Teerakulpisut, Phuket Marine Office chief.

“Usually we have one boat out on patrol,” said Lt Col Chatchai.

“During the Seven Days of Danger [April 11-17], we will have four boats patrolling around piers, beaches, nearby islands and the areas of Phang Nga Bay under our jurisdiction.

“We will be on the lookout for overloaded boats and passengers not wearing lifejackets and we will also be checking boat captain’s licenses and boat registrations.

“We will have extra officers on duty and more boats ready to respond to emergencies around the clock,” he said.

“There were no serious accidents last year, but we did notice some speedboat drivers taking tourists out in stormy weather that caused passengers to get knocked around a bit.

“We would like to ask speedboat drivers to take care and prioritize the safety of their passengers,” he said.

The Marine Police will be operating a 24-hour emergency hotline during the Seven Days of Danger. The number to call is 196.

Phuket Songkran: Four accidents but no deaths on Day 1