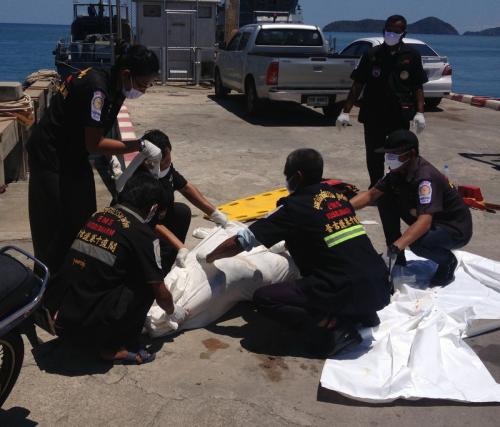 PHUKET: Police are trying to determine the identity of a man whose body was discovered off Cape Panwa, on the east coast of Phuket, today.

Local villagers found the body floating near the channel marker to the Deep Sea Port at about 12:30pm.

“We believe the body was in the water for more than five days before it was found,” Sub Lt Suporn Muangkai of the Wichit Police told the Phuket Gazette.

“The man was about 170-180cm tall. He was wearing black shorts and a ‘We Love The King’ wristband on his left wrist,” he said.

The body had one deep cut at the bottom of the head.

“We have been unable to confirm the man’s identity, or even if the man was a foreigner or not, due to the condition of the body,” Sub Lt Suporn explained.

“We asked villagers in the area, but no one knows who he was. We will continue our investigation into his death,” he added.

The body was taken to Vachira Phuket Hospital in Phuket Town for a post-morten examination to confirm the cause of death, Sub Lt Suporn said.

Phuket Songkran: Four accidents but no deaths on Day 1