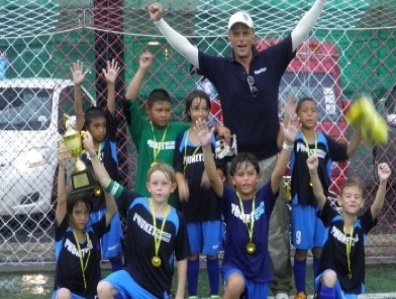 A pre-game warm-up and pep-talk fired up the PSS squad, who went on the attack straight from the whistle.

Daniel C scored in one of PSS’s first attacks and his goal was followed by a great half-volley from Fard, which left the Wassaone keeper with no chance.

Daniel C scored two more goals to claim a first half hat-trick and William P also got on the score sheet, firing in from the edge of the box to take PSS into the half-time break with a commanding 5-0 lead.

Players started to play in different positions in the second half as the rain lashed down making the conditions very difficult. PSS adapted better to the wet conditions as they kept the pressure on, with Joe H scoring two, Fard and William each adding one more to their tally, which was topped off by Micah D who slotted one in from close range.

Patong did manage a consolation goal but it was to be PSS’ day as they secured a comfortable 10-1 win and the winner’s trophy.

Daniel C won the man of the match award

“We had many different goal scorers scoring from different positions. Some of my players have not played 7v7 before so it was great to see them adapt to this formation so well,” he said.