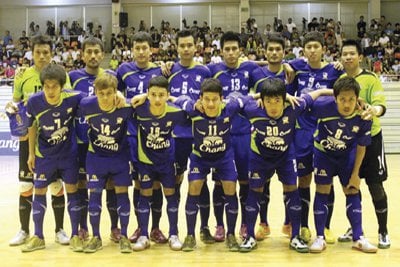 PHUKET: The War Elephants charge into the Futsal World Cup hoping to restore some pride after the embarrassment of Thailand’s failure to adequately prepare for the event. The sport’s most prestigious tournament starts November 1 with the host nation’s first game against Costa Rica, but it won’t be at the new indoor futsal arena.

The center piece 12,000-seat stadium in Bangkok’s Nong Chok district is still not ready for the official handover to FIFA as construction has not finished, which pushed the handover back to October 29.

The opening ceremony has been moved to the 6,000-seat stadium Hua Mark Indoor Stadium, and Bangkok’s governor spent a restless night sleeping at the as-of-yet unfinished stadium last week to show that he is fully committed to getting the desired work done.

As mentioned in the Phuket Gazette a couple of weeks ago, group games will be played at the 5,000-seat Nimitbur Stadium in Bangkok and the 5,000-seat Korat Chatchai Hall in Nakhon Ratchasima.

The reality is the new stadium can not host any games until the quarter finals, if at all. And all this reflects badly on the host nation, but it has diverted a lot of attention away from Thailand’s futsal team, who are currently playing a pre-world cup warm up tournament in Bangkok.

Thailand beat Egypt 4-3 in their first game of the five-team All Stars Futsal Festival, but they suffered a 5-4 defeat in their next game against Australia.

Thailand’s other two warm up matches against the Oceanic champions the Solomon Islands, and Panama took place at the time the Gazette was going to press.

Thailand’s manager, Dutchman Victor Hermans, claims his players have set a target of reaching the last eight, which for a nation that has never progressed past the group stages in the last three editions, could prove to be a tough feat.

The War Elephants build up to the World Cup started well with them winning the ten-team AFF competition in April, and reaching the ASEAN Football Federation (AFC) Futsal Championship final, only to lose out to Japan.

Herman’s believes a heavy 8-0 loss followed by a 6-4 loss to European champions Spain in August didn’t dent his players confidence.

“When they recovered mentally they improved much with a 6-4 loss in the second game. If you think strong, you can play better” he said.

The player expected to shine for Thailand is 23-year old striker Suphawut Thueanklang.
The youngster finished the AFC Championship as joint top scorer with 7 goals and the World Cup is the perfect stage for him to show how talented he really is.

Brazil are the current world champions after they beat Spain in the 2008 final in Brazil.

The six previous World Cups have been won by either Brazil (four times) or Spain (twice).

Thailand’s current manager finished top goal scorer and was part of the Holland team that finished runners up to Brazil in 1989.