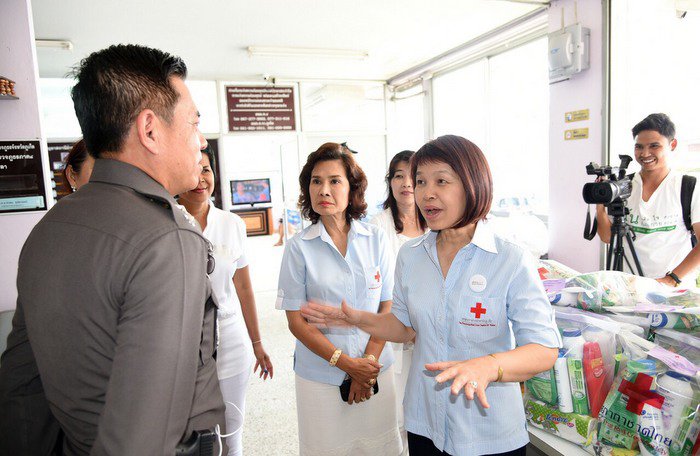 PHUKET: In an effort to show their support for the Thalang Police Station after last weekend’s riots, the Phuket Red Cross donated 30 packs of personal hygiene products to officers.

Vassana Tipayapongtada, President of the Phuket Red Cross and wife of Phuket Governor Chamroen Tipayapongtada, presented the gifts to show the Red Cross’s appreciation for the police officers’ restraint during the attack on the station.

“On behalf of the Phuket Red Cross, we would like to say that we’re sorry for what happened to the police station. We would like to pass on our support to all of the officers who were so patient and inflicted no harm on the rioters,” said Ms Vassana.

“Though the pictures of burning cars and the damaged building will likely affect Phuket’s reputation, we think that the government remained professional. We would like the world to recognize this.”

Thalang Police Superintendent Chanuchan Cholsuwat was thankful for all of the support.

“We have started repairing the building and hope that it will be done soon,” Col Chanuchan said as he thanked Ms Vassana.