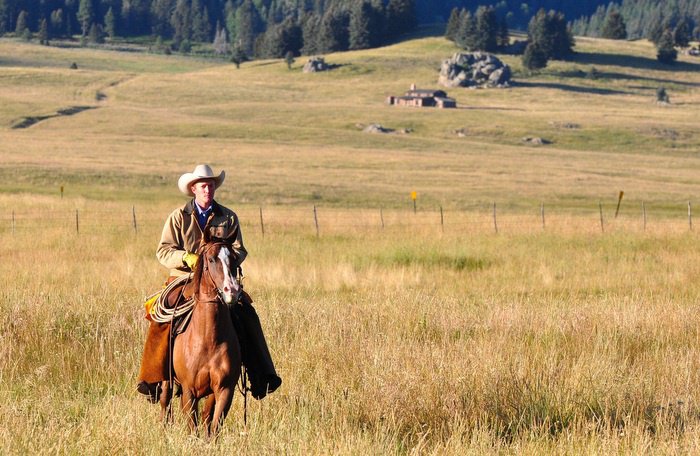 PHUKET: There was a time, for about three decades in the middle of the last century, when Westerns were the predominant form of American entertainment. Books, magazines, movies and television shows were all devoted to tales of the Old West. Cowboy writer Louis L’Amour was the country’s bestselling author, and even the great Elmore Leonard got his start writing pulp Westerns.

Along the way, some real literature was created: Lonesome Dove by Larry McMurtry, Blood Meridian by Cormac McCarthy and True Grit by Charles Portis. The latest candidate for this kind of immortality is Robert Bausch’s Far as the Eye Can See (Bloomsbury, New York, 2015, 307pp).

Alas, it doesn’t even come close to raising the bar. While the aforementioned novelists fully inhabited their 19th century characters, Bausch remains stubbornly apart, a sentimental 21st century voice of political correctness – showy reverence for nature and the American Indian – despite a stab at ungrammatical narration. The plot is contrived, the characters shallow, the philosophizing lame.

The narrator is Bobby Hale who had made a living during the Civil War by collecting recruitment bonuses, deserting, and then claiming a new bonus under a new bogus name. He did this seven times. Nevertheless, he did get caught up in some battles – Fredericksburg, Chickamauga, Spotsylvania – and acquitted himself well.

After the war, in 1869, he joins a wagon train going west, equipped with a fast mare named Cricket and an Evans repeating rifle with a magazine of 34 bullets. His vague idea is to find land and a wife in Oregon or California. Instead, he wanders off hunting and trapping in ‘the paradise’ of the Rocky Mountains with a giant Crow Scout named Big Tree. “I’ve said it before and I’ll say it again, there wasn’t never a man more free on earth than an Indian,” Hale observes.

In line with every cliche, Big Tree is both magnificent and silent. In any event, after five years in the wilderness, Hale never picks up any Indian language. He does acquire an Indian bride, a tall Sioux named Morning Breeze, but she runs off with Big Tree, leaving Hale to return to white civilization in Bozeman, Montana.

Here he winters in a covered wagon with two sisters, Eveline and Christine Barkley. He becomes informally betrothed to Eveline before going off to scout for the US cavalry in Yellowstone Valley. This is in the spring of 1876, just before Custer’s Last Stand. Hale promises to return to Eveline in June.

Instead, through more improbable plot contrivances, he winds up fleeing both the Indians and the cavalry. He shoots a stalking Indian only to find his victim is a half-white woman named Ink, captured by the Sioux at age 16 and fleeing her warrior husband of five years, named Hump.

As Ink is recuperating from her wounds, Hale gives her this phony little speech: “I been where most folks never go. I seen what most folks never seen. I fought in battles… I foraged and roamed the countryside like a wild animal with other wild animals. I know what I’m doing.”

Hale and Ink head for Fort Buford in North Dakota where Ink’s white father was last seen. In their wanderings, they adopt a cute little Cheyenne orphan boy, Little Fox. They sleep by day and travel by night, afraid of the relentless Hump, but it is a group of white renegades who rape and abduct Ink, leading her to decide to stick to the Indians, specifically the Nez Perce, who have a reputation for tolerance and peace.

Thus, the novel ends tied in a tidy bow, decorated with more leaden philosophizing. In case this is not enough, the author appends a windy afterword, continuing his lecture on Native Americans 101. The moral is that white men are bad: “They believed that God blessed them in their endeavors… This meant ‘civilizing’ and ‘saving’ those who were not of the same belief, and eradicating those who could not accept it.”