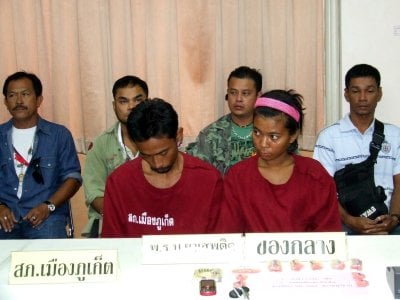 PHUKET: With no end in sight to the battle against the illegal trade in ya bah (methamphetamine), Phuket Provincial Police hope to buy high-tech drug detection technology in order to better check vehicles entering the province at the Tah Chat Chai checkpoint.

Phuket Police Commander Pekad Tantipong made the announcement at a press conference at Phuket City Police Station this morning.

The meeting was held to announce the arrest of a young couple caught with 1,546 ya bah pills at 2pm yesterday.

Miss Chanjira holds the rank of “acting sub-lieutenant” in the Royal Thai Army and worked as a tour guide until her arrest, police said.

The couple were arrested at their home in the Irawadee Village 2 housing estate on the Bor Rae–Ban Narang Rd in Wichit.

Police said they acted on a tip-off that a Surat Thani-registered Nissan pickup-truck would arrive at the checkpoint that day. They allowed the vehicle to pass though the checkpoint, then trailed it to the home in Wichit where they made the arrest.

Seized as evidence in the case were the the pickup truck, 1,546 ya bah pills, and a notebook said to contain a list of clients and banking transactions.

Mr Pratya said it was his first time dealing narcotics.

After reading the press statement, Maj Gen Pekad told the press that there had been an increase in the number of drug arrests in July, with 118 cases.

The number of cases shows a dramatic increase over July 2009 when there were just 47 cases.

Tah Chat Chai, Chalong and Kathu were the areas with the largest increase in arrests. This reflects a worrying increase in the amount of illegal narcotics reaching the island, Maj Gen Pekad said.

He advised parents to maintain strong, affectionate relationships with their children so they don’t fall into the trap of drug addiction. Behavioral changes and constant requests for cash with no clear explanation as to how it is spent could indicate a drug problem, he said.

On the technical front, he said a research committee was sent to the northeastern province of Nong Khai on August 11 to observe the operation of a drug detection unit at a border checkpoint there.

During his visit to the island last month, Deputy Interior Minister Thavorn Senniam said his ministry was prepared to provide partial funding for one such unit, prices for which range from five million baht to 20 million baht.

Additional funding could come from other organizations and agencies, he said.

Maj Gen Pekad did not go into detail about the type of technology used, or if it is related in any way to the now-discredited “molecular resonance” technology used in the controversial “Alpha 6” units that are still in operation by some law enforcement agencies on the island.

Both stationary and mobile units are available, and a fixed unit would probably be more appropriate at the Tah Chat Chai checkpoint, he said.

There have been several major drug busts at Tah Chat Chai in recent weeks. All have been the result of thorough checks following tip-offs.

Another common method used by drug dealers to get narcotics onto the island is by stashing them away in luggage stored in the baggage hold of Phuket-bound tour buses departing Bangkok.