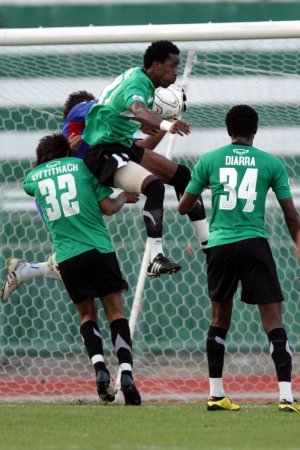 Ranong FC went into the match with 34 points, fighting to keep their second place standing and a chance for the promotional playoff spot that goes with it, but like many second-place teams before them, they were no match for FC Phuket.

Phuket midfielder Camara Ahmed drew first blood 33 minutes into the first half with an outstanding shot from 40 yards out into the top right corner over the outstretched arm of Ranong FC keeper Nattaphon Krobyoo.

In the second half, FC Phuket’s Thawin Bootsombat stretched the lead to 2-0 with a brilliant solo effort at 65 minutes.

Ranong FC struck back just a minute later on a nice goal by Burmese player Lagel, but the “Andaman Sharks” were never able to get the equalizer; FC Phuket picked up another three points to clinch the title with an unassailable ten-point lead going into the final week of play. They celebrated the historic win with two bus-loads of FC Phuket supporters who made the trip north for the away match.

To view highlights of the match, which was televised by Siam Sports, click here.

FC Phuket’s final home game of the season is at home against Nakhon Sri Thammarat FC on Sunday.

Game time is listed at 5pm, but kickoffs so far this year have been closer to 6pm.

Security at the matches is now being overseen by Tourist Police volunteers, who are prohibiting glass bottles in Surakul Stadium. Beer is still permitted, but it must be in cans.

Entrance fees are 50 baht for adults, 20 baht for children.

In other Division 2 South matches played over the weekend:

In a match played on Tuesday, Pattani FC beat Yala FC on the road by a score of 1-0.