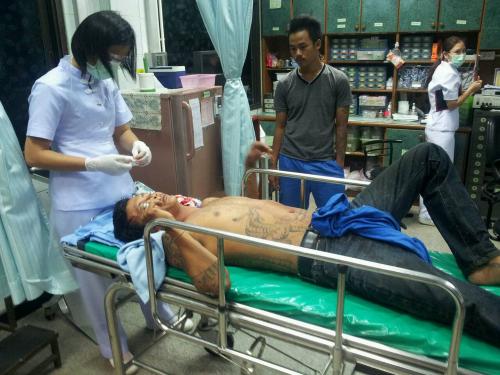 PHUKET: Police are on the lookout for a gang of youths wanted for a vicious attack on two men outside a karaoke bar in Thalang early yesterday morning.

Officers were called to the scene, an unnamed karaoke bar in Soi Ta Mhen, Muang Mai, at 3am.

“When we arrived we found Wicharn Mueanprasart, 34, with a knife wound to his forehead,” said Capt Narong Muangdoung of the Thalang Police.

“His friend Tawee Malangpoo, 33, had bruises on his face and a large abrasion on his left arm,” Capt Narong said.

The two men went to the karaoke bar after finishing work at a nearby car care center.

“Near our table were four young men. They looked like the local bad boys. They kept looking at us even though we had never seen them before,” Mr Wicharn told police.

“After the bar closed, we went outside and saw about 10 guys waiting for us. Then the four guys who sat near us inside called out for them to attack,” he said.

During the onslaught, Mr Wicharn was cut by a knife wielded by one of the assailants.

“I managed to run away and I shouted for help. Local villagers came out and called the police. That’s when the gang ran off,” he explained.

Mr Tawee told police that he managed to flee to a nearby rubber plantation.

“When I felt it was safe, I came out and called my friend to pick me up and take me to the hospital,” he said.

Mr Wicharn suggested that he and his friend Tawee were attacked as they were attracting more attention – and better service – from the hostesses at the bar.

“We are now obtaining statements from the karaoke staff so we can arrest the suspects,” he said.