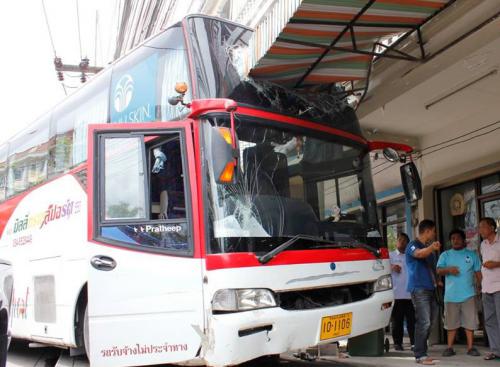 No tourists were on board the bus at the time of the accident, but the juggernaut slammed into two cars and three motorbikes before it came to a halt when it plowed into the front of a shophouse on Bangkok Road.

“One man and two women on motorbikes were hit by the bus while they were waiting at the traffic lights,” said Capt Weerachart Srira of the Phuket City Police.

“One is seriously injured. She hit the road and was bleeding profusely from her mouth when she was rushed to hospital,” he said.

All three were taken to Vachira Phuket Hospital in Phuket Town, he added.

“The bus also struck a Toyota Yaris at the intersection, but the two women in that vehicle were not injured,” Capt Weerachart said.

“I was heading to a depot on Koh Sireh for regular maintenance. I tried to brake before the intersection, but nothing happened,” he said.

“All I could do was sound my horn and go through the intersection, but as soon as I could I stopped the bus by driving it into the building,” he added.

“I thought it was best to do that where I could see no people were walking along the street than to keep going,” Mr Chuchart said.