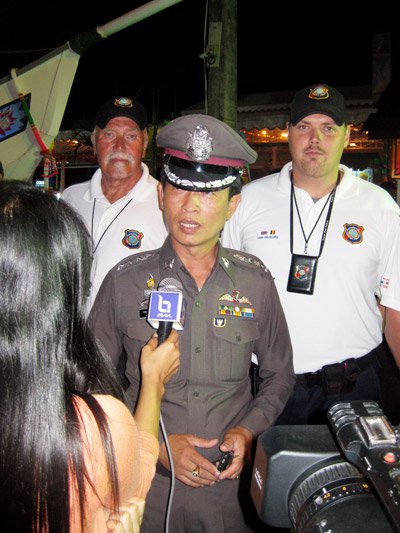 PATONG, PHUKET: Kathu Police and supporting organizations held a ceremony on Soi Bangla last night that included a brief photo shoot with tourists, assuring them that their safety is a top concern.

Activities started at 7pm in front of the Baan Sukhothai Hotel & Spa on Soi Bangla.

The large ceremony was presided over by Phuket Vice Governor Teerayut Eimtrakul.

After the ceremony, the officials took a stroll down Soi Bangla, where they greeted tourists and handed them bookmarks, encouraging them to use the Tourist Police hotline at 1155 if they fall victim to any crime.

There is an especially large contingent of foreign Tourist Police Volunteers ready to lend a helping hand in Patong, he said.