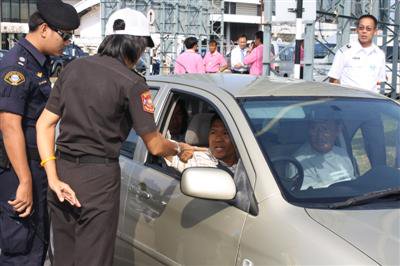 MAI KHAO, PHUKET: Tourists disembarking at Phuket International Airport this morning encountered even more high-season chaos than usual, as police erected a new checkpoint there in an attempt to crack down on illegal ‘black plate’ taxis.

Phuket International Airport Director Prathueng Sornkham held a meeting at the airport yesterday to announce the crackdown, which he said was put in place at the request of the Ministry of Tourism and Sports following complaints from tourists.

The crackdown began at 9am sharp, when Wing Commander Prathueng was joined by Phuket Land Transport Office Director Kanok Siripanichakorn, Tha Chat Chai Police and Tourist Police in setting up a checkpoint at the exit gate of the airport to check for private cars carrying paying customers.

“Most of the complaints are from tourists, who say the black plate drivers annoy them by taking them on shopping tours against their will and pestering them to buy things they don’t want or need. Some of them fall victim to scams,” he said.

The crackdown will continue, he said.

“We need to restore our good image among tourists…From the information we have, we think there are now about 200 illegal taxis operating here and we hope to solve this problem soon,” he said.

Mr Pratueng said he called yesterday’s meeting to let everyone at the airport know in advance what was coming, so that services there could continue as smoothly as possible despite the crackdown.

“We really have to help each other out, as currently there are 100,000 passengers transiting through the airport every month,” he said.

The only ones left out of the loop, it seems, were tourists. Many were forced to wait about 30 minutes with no idea what was going on while authorities interrogated their drivers.

Black plate taxis have long operated clandestinely at the airport, which is run by Airport of Thailand (AoT) Public Company Limited.

All taxis legally picking up fares from the airport must pay AoT, which has a concession arrangement with the Phuket Mai Khao Company to run sedan limousines onto AoT property.

Metered taxis are also allowed onto AoT grounds, but must pay a flat fee per fare.

In both case, the costs are passed on to passengers. Both limousine drivers and metered taxis have long complained that taxi syndicates controlling other parts of the island make it impossible for them to pick up return passengers, further increasing their fuel costs and driving up fares.

One ‘black taxi’ driver told the Gazette he was only reacting to passenger demand by supplying transport to and from the airport at true market value.

Most of his customers were either friends or repeat customers that called him on his cell phone when they needed transport to or from the airport.

Many are expat residents who refuse to use the overpriced services of organized transport operations on the island, he said.

He never tries to take his passengers anywhere they don’t want to go, he said, but admitted that other illegal drivers might employ such tactics.

If stopped by authorities, he would simply say the passengers were his friends and he was providing the service free of charge, he said.