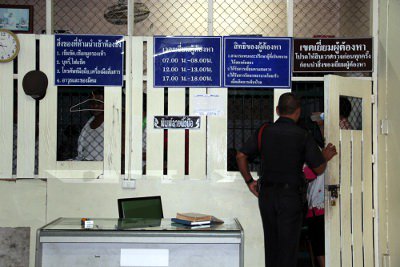 PHUKET: Phuket City Police last night raided an apartment building in Chalong, arresting 16 people for gambling on the popular “shrimp-fish” board game and seizing over 400,000 baht in cash.

The raid, led by Phuket City Police Deputy Superintendent Serm Kwannimit, caught gamblers off-guard at a makeshift gambling den set up in an eighth-floor room at the Santiphap apartment complex in Chalong Village 1.

Raids on gambling dens in Phuket often end with many of the punters scrambling to freedom through pre-planned escape routes, many of them remarkable for their complexity and creativity of design.

But in this case, the only possible escape was out the window of the 8th floor room where the game was taking place.

Seized as evidence was 402,970 baht in cash and gambling chips in five different denominations representing a total value 1,385,800 baht, he added.

“Police received a report that not only were people using this apartment as gambling den, but that the players’ excitement generated so much noise that it annoyed neighbors,” he said.

Undercover “spies” cased the apartment for possible escape routes and police applied for a search warrant before conducting the successful raid, he said

“All were charged with gambling and placed in cells at Chalong Police Station,” he said.

The kung-pla (“shrimp-fish”) game is a popular board game in the south of Thailand.

Its popularity with gamblers has spread to the extent that an electronic version is now available in some casinos, legal and otherwise.