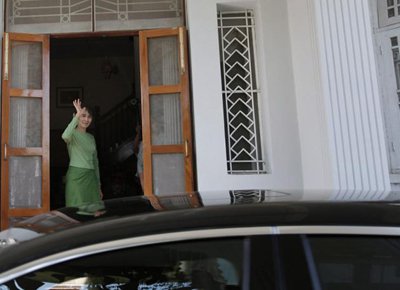 According to Mizzima News, the Union Election Commission (UEC) said a ministerial order from the sports minister which restricted campaign rallies in stadiums had been lifted. The announcement came after the main opposition party, the NLD, complained in a press conference that the campaign process was not free and fair.

The NLD publicly accused sports minister Tint Hsan of hampering its campaign activities as the party had been prevented from using three sports fields for the rallies.

Campaign manager Nyan Win earlier said the government has prevented the NLD from holding election rallies in a village in Kachin State, citing security concerns. “So why do they hold by-elections in a constituency where they cannot ensure security?” Nyan Win asked, as quoted by Mizzima News.

Aung San Suu Kyi is running for one of the 48 parliamentary seats during the April 1 by-election. The famed politician spent 15 of the last 21 years under house arrest until her release in November 2010.

The fairness of the April 1 by-election is being studied carefully by the international community as a test of the newly elected government’s promise to hold a free and fair election. Western governments have said Suu Kyi’s judgment about the election’s fairness would be decisive in whether or not further sanctions are lifted on the military-dominated government.

Myanmar held its first elections in 20 years in November 2010, paving the way for the end of 49 years of military rule. The country has undergone a rapid number of political changes in the past year, including the loosening of press laws, legalizing the right to demonstrate and organize as workers, the release of leading political prisoners, and ethnic cease-fire agreements.

PHUKET (The Nation): Malaysian Prime Minister Najib Razak, who met with his Thai counterpart Yingluck Shinawatra here on Monday, said Bangkok should focus on creating greater participation for the southern Thai people in matters such as the economy, education and religion.

He said Yingluck had requested Malaysia’s cooperation in helping Thailand find a durable peaceful solution for the South.

“We both agreed that this is a domestic matter for Thailand and that the people in the south must not seek a separate state.”

“They must reject violence and extremism, be loyal Thai citizens and be loyal to the King of Thailand,” Najib said in a joint press conference with Yingluck at Perdana Putra after a one-and-a-half-hour meeting yesterday.

Yingluck, who is on her first official trip to Malaysia since assuming the premiership in August last year, voiced her support for Najib’s call for a global movement of moderates.

“Thailand firmly believes that moderation is the key to peace and development.

“This will not only promote economic possibilities for the people along the border and surrounding areas but also enhance regional connectivity,” she said.

Najib said about 400 Malaysian firms had invested in Thailand.

“There is a discussion going on to look at the new cross-border agreements between our countries.

“We also touched on the problems of dual citizenship between our two countries and we agreed that we should compare our database so we can resolve this problem,” he said.

Malaysia asked to hand over Iranian

PHUKET (The Nation): A written request has been submitted to Malaysian authorities to hand over an Iranian man suspected of being part of a terror cell involved in the three blasts in Bangkok last week, a senior public prosecutor said yesterday.

The document requesting that Masoud Sedaghatzadeh be handed over to Thai authorities was dispatched through the Foreign Ministry yesterday afternoon.

“We are confident that there is sufficient evidence to support the hand-over, but additional details would be supplied upon request,” said Wanchai Rujjanawong, director-general of the Office of Attorney General’s Foreign Affairs Department.

Foreign Ministry spokesman Thanee Thongphakdee said the hand-over could be done under a 1911 extradition agreement between Thailand and Malaysia. A Malaysian court must first review the evidence supplied by Thai police and make a judgement on whether to hand over the suspect.

Intensive crime-scene investigation found residues of explosives in a room used by the Iranian suspects at the Nasa Vegas condo building, said police explosive-ordnance disposal (EOD) sources. The room was rented by Leila Rohani, a suspect who is believed to have returned to Iran. The three suspects also rented a house near Soi Pridi Banomyong 31, where the three blasts occurred.

Another suspect, Mohammad Khazaei, was questioned for seven hours yesterday. He reportedly did not answer questions about stickers bearing the word “SEJEAL” that were found posted along a Bangkok street. According to police, the street is regularly used by Israeli diplomats allegedly targeted by the suspects.

Deputy Prime Minister Yuthasak Sasiprapha said Israeli diplomats who met him on Monday praised Thai authorities for conducting a thorough investigation into the explosions and for the swift identification and arrest of the suspects.

“The suspects’ preparations were not known by Israeli intelligence services before the explosions occurred, and the incidents indicate that Israeli diplomats are also targets of terror attacks, not just Israeli tourists as widely believed,” Yuthasak quoted the diplomats as saying.

The diplomats thanked Thai authorities on behalf of the Israeli government, and urged Thai authorities and intelligence services to stay alert and not underestimate terrorists’ potential, or overlook details that could point to potential major incidents, Yuthasak said.

National police chief Pol General Priewpan Damapong has forbidden police investigators from giving interviews or commenting on the ongoing probes, assigning a deputy, Pol General Pansiri Praphawat, as the only spokesman in the case.

Before the gag order took effect, a senior EOD officer, Pol Lt-Colonel Kamthorn Ui-jaroen, said the first explosion at the rented house was accidental, possibly resulting from mistakes made while setting a fuse and five-second timer, sending the suspects running for cover.

Suspect Saeid Moradi, who lost his legs in two attempted grenade attacks following the blast at the house, may have sustained his head wounds in the initial blast, rather than from grenade shrapnel, he said.

He said bombs found in the house would have been very effective because they were to be detonated by hand grenades placed inside, which he said was a better method than using a mobile phone or two-wa