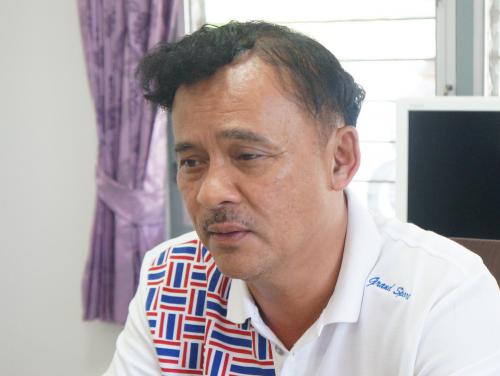 PHUKET: The commander of the Phuket Provincial Police has called for the media to not “help suspects” by publishing news of the car bomb found in Phuket Town last weekend.

Maj Gen Ong-art Phiewruangnont’s call for media silence follows police confirmation that a pickup truck rigged as a bomb discovered in Phuket Town last Saturday was stolen from a man shot dead in a car heist in the strife-torn Deep South province of Pattani in May (story here).

“The media is free to publish stories as they choose, but they must be aware that the more information they give about this story, the more confidence the suspects will have,” Gen Ong-art told the Phuket Gazette.

“It [the news] should be an official secret because we do not want it to affect Phuket’s tourism image. Publishing the story may inspire a feeling of success for the perpetrators in their cause,” Maj Gen Ong-art said.

Despite confirmation from other police stations that the pickup truck owner, Withan Yachumnan, was shot dead in the carjacking of his vehicle in Pattani, Commander Ong-art remains unconvinced the bomb found in Phuket is directly linked to the Deep South insurgency.

“It’s possible, that’s all we can say at this stage,” he said.

In line with his call for silence on the bomb scare, Gen Ong-art declined to reveal any details about the bomb or its potential blast effect.

“We cannot reveal any information about the incident because it is still under investigation,” he said.

Gen Ong-art also said he could not confirm that the pickup truck “car bomb” was the largest explosive device found in the island’s peacetime history.

The Phuket Gazette notes that in its news team’s 20 years of reporting incidents on the island, there has not been a single report of a bigger bomb being found here than the two gas cylinders rigged to explode in the pickup found last Saturday.

Commander Ong-art even countered that he believed the explosion at Phuket Provincial Hall on August 1 (story here) had a more damaging impact than the car bomb blast would have had, had it gone off.

“I think the bomb [in August] was stronger because there was nothing to contain the blast. The new bomb would have only incinerated the pickup truck when it exploded,” he said.

Despite his call for media silence, Commander Ong-art did announce that he has ordered police across the island to be vigilant for suspiciously parked vehicles.

“For public safety, we have ordered every police station to double patrols and to call in more public volunteers and plainclothes police to assist regular officers,” he said.

“We will conduct random checks of vehicles. We don’t care which license plate the vehicle has. If officers see a suspicious vehicle, they will stop it and search it,” he explained.

Gen Ong-art assured that the heightened protective efforts will extend beyond the new year holidays.

“We want to assure everyone about their safety. We will do everything we can to prevent an incident in the province because that is our duty – to protect the lives and property of the people,” he said.

“To helps us, if anyone sees a suspicious object or a car parked in the same public place for more than one day, please inform the police as soon as possible.

“We wish all tourists and residents on the island great success in their lives, and a happy and safe new year,” Gen Ong-art added.