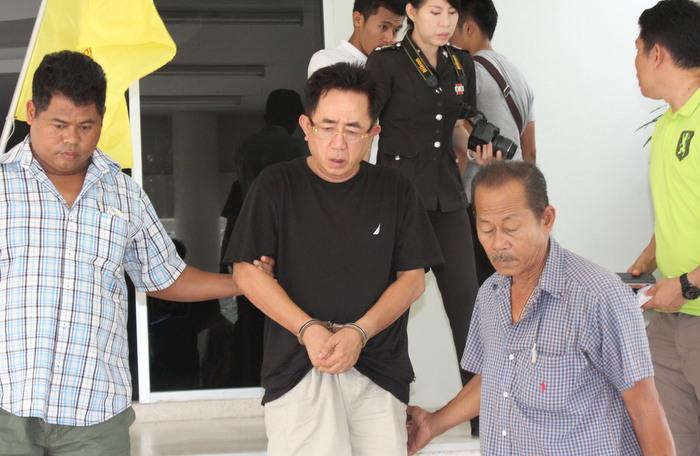 PHUKET: The ‘purchaser’ for a nationwide credit card theft ring that targeted tourists was arrested on Sunday in Phang Nga after he escaped Phuket in a dramatic car chase.

Pitawat Akarathitiveerakul, 53, explained to police that he was part of a criminal network that stole tourists’ credit cards when they put their luggage on buses and other forms of public transport.

“The stolen credit cards were then sent to Mr Pitawat, who used them to purchase expensive items that could be resold in other locations in the country,” explained Lt Col Prawit Engchuan of the Phuket Provincial Police. “The profits were then split among those involved, with the original thieves getting a flat rate of 10,000 baht per credit card.”

Police were tipped off to the operation after Kasikorn Bank informed them of the suspicious card transactions.

“We had the time and place of the transaction, so we were able to review CCTV footage and get a clear image of the suspect. Mr Pitawat had a criminal record for this type of fraud, so we were able to find him in our system,” said Col Prawit. “We placed him under surveillance in order to catch him in the act and hopefully net others involved in the crime as well.”

On Sunday, police witnessed Mr Pitawat make a fraudulent transaction at Tesco Lotus Chalong. They followed him out of the store and into the parking lot, where they saw him get into a car being driven by Rakrob Daroonphan.

“When we presented ourselves, Mr Rakrob sped away with Mr Pitawat,” Col Prawit said. “Officers gave chase, and even shot out one of the tyres of the car. However, he was still able to escape.”

Police tracked down the escaped car on Soi Palai. However, according to witnesses, the suspects had simply switched cars and continued to flee the scene.

By the time police provided officers at the Tah Chat Chai checkpoint with a description of the car, the suspects had already crossed the bridge into Phang Nga.

“Nonetheless, officers eventually caught up with Mr Pitawat in Khok Kloi. He was in the car with a different driver, who was not connected to the crime,” Col Prawit said. “In his possession we found five ATM cards that were not in his name, 300 packs of cigarettes, three Samsung phones, a Gucci watch and a camera worth 30,000 baht.”

Other items allegedly purchased illegally by Mr Pitawat, including iPhones and iPad Minis, had already been sold in Bangkok.

Police are still hunting for Mr Rakrob, as well as attempting to identify other members of the criminal network.